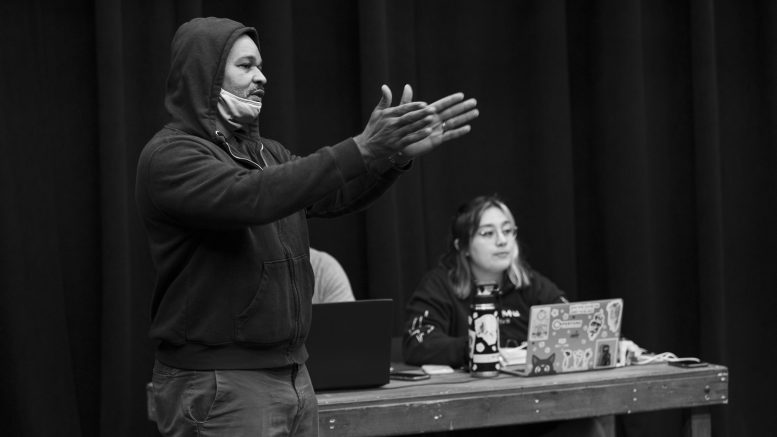 Pictures from rehearsals of THE HOUSE OF BERNARDA ALBA. Photos by Ivan R. Lopez

FIU Theater is preparing for a production of “The House of Bernarda Alba.” Written by Spanish playwright and poet Federico Garcia Lorca, it was originally published in 1945. This will be the first FIU play since the pandemic began in which the actors don’t wear masks on stage.

The play follows widow Bernarda Alba and her five unmarried daughters. She forces her daughters to a rigid period of mourning for their father while keeping them confined at home. Each daughter reacts differently to the suppression they live under, which reveals themes of repression and depression, which director Melvin Huffnagle believes are universal.

“I think a lot of things will resonate with whoever is watching it, and it doesn’t matter from what culture you are or what your background is,” said Huffnagle. “You’ll be able to understand and take the journey with the characters.”

For junior Marla Lopez, who plays Bernarda Alba, the show is all about the dark side of family matters, even when the messes come from a place of love. Lopez hopes that after watching the show, audiences will think about how important understanding your family is.

Such an emotional story of tyrannical rule by a family member requires great emotional depth from its actors, which isn’t an easy feat. Lopez said that bringing out the emotion in rehearsals every night is exhausting.

“Every night, the more and more I do it, I find an easier way to get there in a truthful way,” said Lopez.

For junior Sofia Salgado, getting to the emotional depth of playing Poncia, Bernarda’s right hand, involves a lot of imagination and real-life references.

“I fantasize about [Poncia’s] life and her background, [parts] that the play might not explicitly state,” said Salgado. “Poncia reminds me of my mother in certain ways so I look to her.”

The characters in The House of Bernarda Alba are mostly all women, a point which Huffnagle feels makes it a great play to bring to FIU.

“There’s so few roles for women in the theater,” Huffnagle said. “All of these women are really rich and vibrant and allow the actors to really show off their art and their craft.”

Lopez agrees, saying that playing these women who are all under extreme circumstances of isolation and emotion is a fun area to play and explore as actors.

Something else the actors have been playing with is keeping Spanish in the play. They decided to maintain some moments in the original language of the play to preserve some of the poetry that sometimes gets lost in translation.

Additionally, Salgado hopes those moments in Spanish helps the show resonate more with the audience, since a lot of people in FIU and Miami speak the language.

“It was definitely the finishing touch to everything,” said Salgado.

“The House of Bernarda Alba” will run at Wertheim Performing Arts Center at the Modesto Maidique campus starting Apr. 15 through Feb. 24. Tickets for the show are on sale at https://fiutheatre.universitytickets.com/