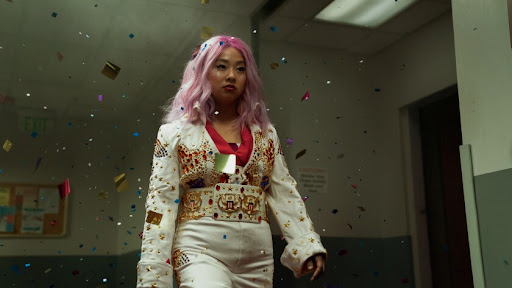 Throwing all caution to the wind, or rather into the bagel, the second film from directing pair Daniels, “Everything Everywhere All at Once,” hits its audience with a sublime voyage through the surreal.

It’s relentless. A vision of narrative and pure cinematic harmony. Summarization fails to really ensnare the same aura this film lends its audience. It’s truly an onslaught of emphatic emotion cleverly plotted along the absurd.

At the helm of her laundromat’s audit, Evelyn (Michelle Yeoh) struggles to keep her family in balance. Her ill father (James Hong) resides in her apartment, disapproving of her every move. She’s clueless of her husband’s (Key He Quan) pleas for communication. And now her daughter (Stephanie Hsu) wants to bring her girlfriend to the laundromat’s Chinese New Year celebration.

But, almost serendipitously, the fate of multiple dimensions is put into Evelyn’s hands as she must fight a grand evil set on swallowing the universe whole, or more specifically into the hole of a cosmic everything bagel.

At its core, a story of family dissonance –a divorce, a daughter grappling with her queer identity, a working mother stuck beneath her stress– joins its cognizance of existential dread, familiar to all once faced with adversity.

Here, the question of “should I go on?” holds weight, seething with an inherent nihilism to stop. Reactionary apprehension might seem like the easiest (and sometimes only) mode of action, but with “Everywhere’s” brightest spots, kindness perseveres through violence.

Daniels, composed of directors/screenwriters Dan Kwan and Daniel Scheinert, deviously twist the rising concept of multiversal interplay into a classic that’s sure to set precedent for the trope’s use. The absolute feat of its story coverage alone is worth high praise. Time itself in theaters bends. With no stutter or drag, the film encapsulates what could very well have been a five-hour trip in less than two and a half hours.

Michelle Yeoh beams with sincerity, bookending an esteemed career with a magnum opus equal parts thrilling and endearing. In its wake, a new star is assured of Stephanie Hsu, who, complimentary to Yeoh, treads the line of spectacle masterfully.

You’d be doing yourself a major disservice if you miss out on seeing this one in theaters. 9/10