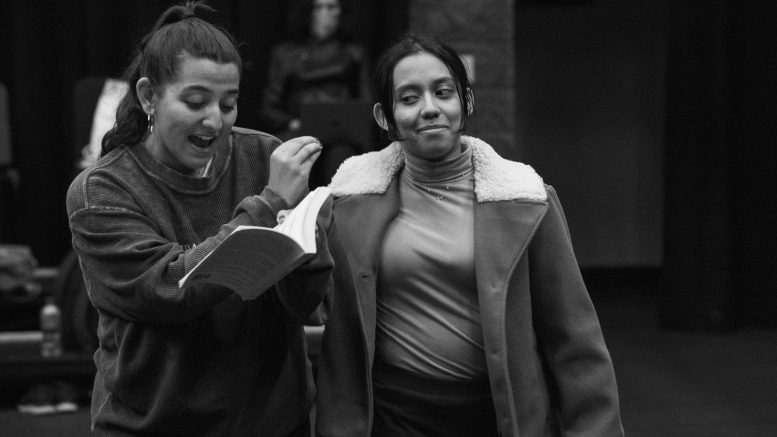 Pictures from rehearsals of THE HOUSE OF BERNARDA ALBA. Photos by Ivan R. Lopez

Translated by Michael Dewell and Carmen Zapata, this new iteration of the classic Spanish play by Federico Garcia Lorca finds a way to keep the 86 year old work fresh and tactile. The sensible and subtle direction by Melvin Huffnagle, benefits from an inspired cast and a more than solid English translation.

After the death of her second husband, repressive matriarch Bernarda Alba decides to honor the family tradition by setting a mourning period of eight years. Her and her strictly monitored five daughters, who cannot go outside the house nor interact with anyone that does not reside within it, shall wear black and resist any kind of celebration or exposure during this period.

Set in rural Andalucia during the early part of the twentieth century, the play explores the fears, conservatism and violent behavior of traditional Spanish society.

Played by Marla Lopez, this incarnation of the tyrannical Bernarda seems uncommonly fragile and emotional. Even at her most cruel and severe moments there are traces of despondency in her, and the closing of the paints an uncommonly sympathetic picture of Bernarda. One that replaces momentarily the madness and evilness of her being in the eyes of the audience.

The rest of the cast is stellar in their performances, which have a mixture of subversive and classic characterization. They also boast an incredible harmony and dynamism that makes this lengthy, slow play fly by.

Amelia (Alexandra Reyes Santos) is kinder and brighter than ever, a more than welcomed contrast to the always melancholic and resigned Martirio (Nathalie Ordonez).

Angustias (Bianca Utset) the older of the sisters remains somewhat distant from the rest of the sisters. These performances have little redo, but are very appealing, engaging and satisfying, they work to maintain the spell of the action and the constant conflict between the sisters.

Surprising vivacity is given to Magdalena (Maleeha Naseer) who plays sometimes as a much needed comedic relief, and brings a change of forms and rhythms to the scenes in which she appears (and often steals). Ponciá (Sofia Salgado), the old, loyal housekeeper, appears as a figure of contrast to Bernarda and of complicity to everyone; she is defiant, funny and truly caring.

Adela,the youngest and more rebellious of the sisters is played by Katherine Galvez with an overtop, weird lunacy. And it is marvelous. Adela appears almost villainous in her constant fight for freedom and agency, which feels ideal for her character and the overarching themes of the play.

Despite its oppressive atmosphere and charged themes, this version of “The House of Bernarda Alba” has a very developed sense of (dry) humor. More than once the audience erupted in laughter amid an amusing observation or delivery. It must also be mentioned that the stage, lightning and sound design are subtle but perfectly fitting,

The best moment of the play may be its ending, which unfolds perfectly, but my favorite part is the small choreography not present in the original play. Unexpected, it makes these characters shine in unexplored ways.