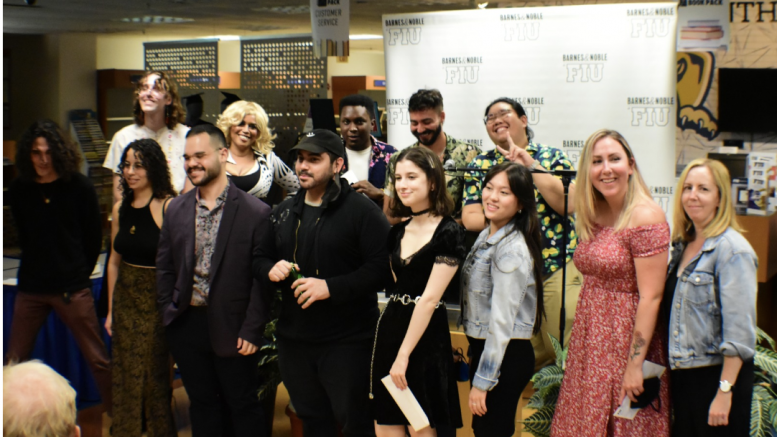 The winners and runner-ups of the Student Literary Awards 2022. Photo by Julian Davis.

FIU’s Creative Writing Program hosted the annual Student Literary Awards this past Thursday, Apr. 21, at the Biscayne Bay Campus. The purpose of the award is to encourage students to submit their work and celebrate those whose work has excelled in the eyes of the judges. Students of all majors can submit for consideration and the reward for winning includes 150$ for the winner of each category.

The event awarded undergraduate and graduate students in the following categories: poetry, fiction, and nonfiction.

The jurors were several recognized authors and faculty members of various creative writing programs in the United States. The awarded students received a financial incentive and had the opportunity to share five minutes of their winning work with the audience.

The undergrad winner of the poetry category was Emily Torres’ “My Gift to the Dead,” a poem about an undertaker who lovingly prepares the dead. The runner-up for the undergrad award was Michael Rojas’ “Rebel.”

The graduate winner was Jordan Hill’s “AR-15 Ode,” a loose revision of the patriotic song “America the Beautiful” that recounts the history of gun violence in America.  The graduate runner-up was Rebecca Wallwork’s “Happiness.” The judge for the category was poet Dorianne Laux, a finalist for the 2020 Pulitzer Prize in Poetry.

Claudio Pietrobelli was the undergraduate winner of the fiction category for his short story “Voyagers, One and Two” a surreal and chaotic narrative about death and extra-sensory perceptions.

Daniela Rodriguez was the undergrad runner-up with her short story “Hunger.” Rebecca Wallwork collected her second award of the night winning in the graduate fiction division with a story called “Aperture,” which revolves around the experience of a young woman in need of abortion in a version of the US that has banned the procedure completely.

“I mean, I’m surprised, relieved, excited, encouraged. It’s the first short story I wrote … I just feel very encouraged. And, you know, I think this it’s such a supportive program,” said Wallwork on receiving her award.

The graduate runner-up for fiction was Sofia Tirado for “The Solution to Rita’s Problem.”

FIU Alumni Dario Suarez, a winner of the International Latino Book Award, was the judge for this award.

The Academy of American Poets Prize was the special award of the night. The judge was Geoffrey Philip, author of six books of poetry, two short story collections, and several children’s books. Ranijun “Ran” Raudo’s  “Immolation” was the winner, a poem full of sensorial imagery about coming to terms with sexual identity. The runner-up was Brittany Owens’ “Osculation and Sisterhood.”

The undergrad winner of the non-fiction category was Yasha Cardona for her story “On Rooms,” which has a very innovative use of language, repetition, and the use of figurative space. The undergrad runner-up was Christopher Montejo  for his piece “Mami.”

Arnaldo Batista won the graduate prize for nonfiction for his personal essay “Walking in High Heels and How Matthew Shepard Walks with Me,” a narration that mixes chapters of Batista’s personal stories with those of Matthew Shepard.  The graduate runner-up for this category was Melissa “Yael” Aldana’s “Not a Blade of Grass Between Us.” Barrie Jean Borich, a recipient of the Lambda Literary Award, was the judge for this award.

The student literary award closes the Writers on the Bay series of events for the spring semester. The host, Professor John Dufresne, spoke during the ceremony about the importance and purpose of the awards for the FIU writing community, “We’re here to celebrate the writers. This is why we’re here, teachers, students and, you know, people are learning and celebrating each other. That’s why it’s very gratifying”

Handicap buttons should be a requirement on campus restrooms