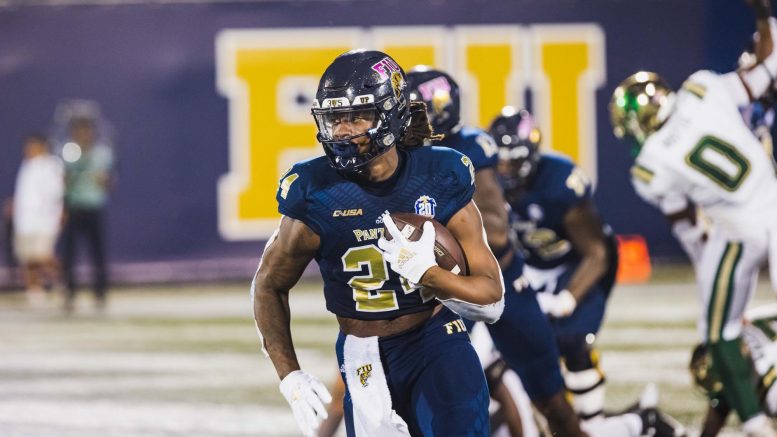 One team has placed their bet on the phenom from Punta Gorda.

FIU RB D’Vonte Price, 6’2, 210 lbs, has signed with the Indianapolis Colts on April 30th, 2022. This occurred immediately after Price went undrafted in the 2022 NFL Draft.

In his four seasons with the Panthers, Price shattered records for most yards-per-rush in a season (6.84) and rushing yards (finished second all-time). His best performance was against the Florida Atlantic Owls on November 13, 2020, where he recorded a career-high 178 yards, the eighth-most in the program’s history.

After an impressive showing at the Reese’s Senior Bowl and NFL Combine, Price garnered serious interest from teams across the league. His combination of size and quickness made him a promising prospect in the eyes of scouts and coaches.

Price now joins up with the Colts, a team that loves to add some depth at the RB position to complement Jonathan Taylor, who is coming off an MVP-caliber season. The Colts finished second in the AFC South with a 9-8 record last season and failed to clinch the postseason after a loss to the Jaguars.

Being on the same team with Taylor can prove to be an invaluable experience for Price and one that can mold him into a better player. It also gives him a golden opportunity to put his skills on full display at the highest level of football.

The Colts clearly believe in Price’s talent and look to develop and utilize it in the upcoming NFL season.

For Indianapolis, the Price was more than right.