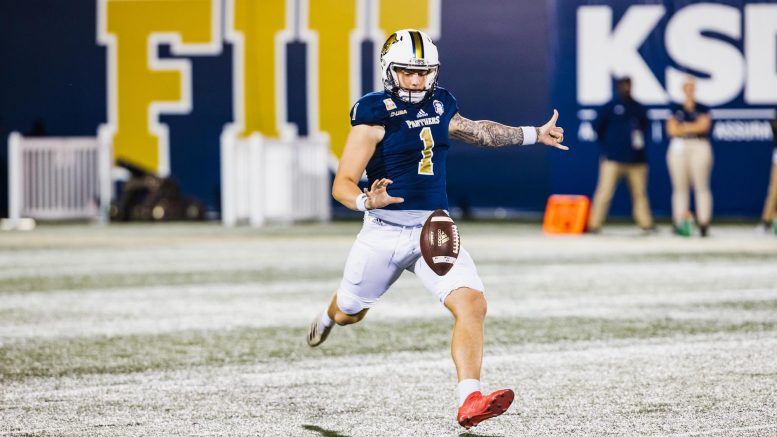 FIU P Tommy Heatherly was named the Conference-USA Special Teams Player of the Year in 2021. Photo by FIU Athletics

Another FIU Football star is getting an NFL opportunity as punter Tommy Heatherly signed a undrafted free agent deal with the Miami Dolphins.

A Grove, Oklahoma native, Heatherly was a three-year starter for the Blue & Gold and continuously broke personal records every year with the Panthers.

In his first season in 2019, Heatherly had 54 punts that averaged for 43 yards, and 15 punts inside the 20, which at the time was ranked as the seventh-most in FIU history for a single season.

In 2020, Heathlery improved once again as he served as the main punter and kicker in all five games. He averaged 44.38 yards on punts, which serves as the highest in a single season in FIU history. Heathlery racked a career-long 69 yard punt against Jacksonville State on October 23rd, which is the fourth-longest punt in Panthers history.

His standout numbers in the five games he played named him as a Ray Guy Award Semifinalist, an award for the best punter in all of collegiate football. He earned an All-Conference USA Honorable Mention for a second straight year.

In his final year with FIU, Heatherly took his game to the next level, leadin C-USA with a mark of 46.8 on average and even ranked eighth in the nation. He punted 21 times inside the 20-yard line and only forced 12 fair catches.

Heatherly joins RB D’vonte Price and DB Josh Valentine-Turner as the only FIU players signed as undrafted free agents from this years class. The trio of Panthers will try to make a name for themselves in the NFL for years to come.