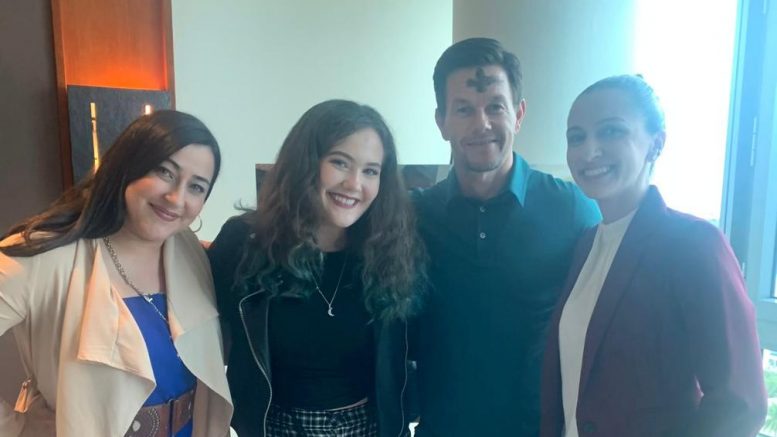 Hollywood star Mark Walhberg sat down with three journalists in a small roundtable, to share his experience through the creation of 2022’s “Father Stu” film.

Earlier this spring Mark Wahlberg’s film “Father Stu” hit theaters on Easter week. The comedic and heartwarming movie is based on the real life experience of Father Stu, a man who started his conversion into Catholicism after a near death experience.

The journey to becoming a Catholic priest was filled with hardship as Stu was diagnosed with an unusual health disease that affected his whole body. Regardless, this did not stop Stu from preaching the word of God until his final days.

On Ash Wednesday, Wahlberg shared some of his experiences of the filmmaking process at a private roundtable. Expressing different topics such as the challenges while filming, marketing a religious movie and how it came to be.

Wahlberg was asked about how he was called to do this film. Sharing how he knows that he is a man that has been given many opportunities and how that comes with a great responsibility.

“I’m supposed to be utilizing that to give back in many ways. And I would be hard pressed to match Stu’s commitment and level of service,” said Wahlberg. “At the same time, if I can continue to echo his message and continue to spread that word…I’ve always been asking for guidance to make sure that I could do more, that I’m doing the right thing.”

Since the film is based on a religious journey, the question of how to market it to the greater audience was raised.

“I just think they [people] want to be respected for who they are and their own beliefs and their own feelings and not being dictated what to do and how to do it, and think hopefully the church will continue to grow and change” said Wahlberg.

The rated R film depicts the reality of the life of Stu. Saying the vulgar words, showing the violence but Wahlberg explained how it is important to show the truth so that the audience can truly understand the journey of Stu.

“I was met with resistance, not only from studios to make this movie, but also from the church, which I was really surprised about,” said Wahlberg.

Wahlberg explained that he realized that when those of the church saw an F bomb on the first page of the script, it was seen as vulgar and unaccepatable without understanding how it was important for the story.

“It was important for us to just say, okay, let’s go make the movie on our own and then bring it to them [the church] and then see what their response is. And then if it’s not, then I will continue to go out there and challenge them,” said Wahlberg.

With only 30 days to film the entire movie, there were challenges that Wahlberg faced during the production.

The most obvious was the weight gain for the physical transformation needed to depict the health problem that Stu faced.

He shared that everything leading up to the film was the most challenging.

Wahlberg not only starred in the film, but he was also the producer.

“It was like trying to just wear two hats being, and producer who had to be really responsible financially,” he said. “You know, we have a ticking clock and when you’re writing the check, you feel a lot more responsible to get everybody on time to make your days.”

The financial aspect was not the only responsibility that the actor faced.

​​”The responsibility that you have to getting it right, and making honoring Stu his legacy most important to his legacy as Father Stu,” said Wahlberg.

Emotionally, there was more under the surface than the eye could see.

Walberg’s mother passed away while making the movie, many of his friends and family were being harmed from the negative impact of COVID-19. Thus, while he was becoming the part of Stu he shares that he had a lot going on in real life.

The film, although religious, is a film for all who want to see a story of hope.

It is not like the average Christian movie that only preaches the love of God or shows cringey scenes to try to prove a message.

The film is real, it does not sugar coat anything. It has curse words, shows the reality of alcoholism, demonstrates the reality of being frustrated with one’s life, sex, and with all of this it is comical.

The film reflects how drastically Stu’s life changed by seeing how half way through the movie the story seems as if there was a 180 degree flip.

“I just want to encourage them to whatever their passion is and what their dream is that they can go out there and work hard to accomplish it…  I don’t want to feel like there’s no more hope for them,” said Walhberg.