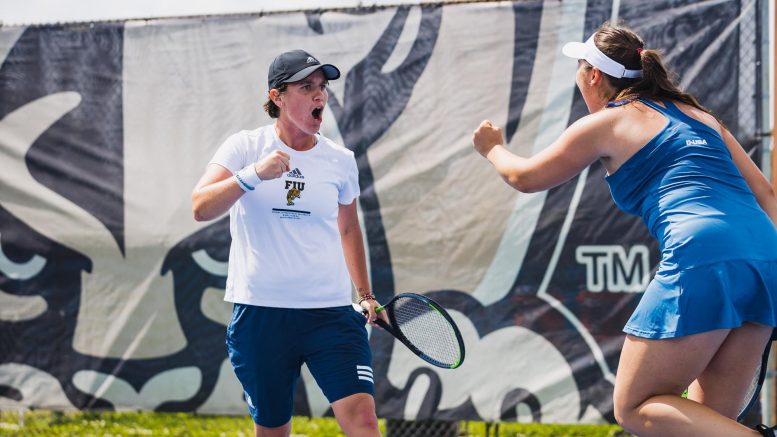 It’s often said that lightning never strikes the same spot twice, but for the electrifying FIU women’s tennis team, it just has.

For the second straight year and 11th time in school history, the Panthers have clinched a berth to the NCAA Women’s Tennis Championship. FIU enters the tournament ranked No. 41 and will face No. 35 Florida State on Saturday, May 7, in Gainesville.

Boasting an overall record of 17-4 and 2-0 conference record, 2021-22 has been a stellar season for the FIU women’s tennis team.

Coach Katarina Petrovich and the team wasted no time setting the tone at the start of the season. After tough losses to the Florida Gators and Columbia Lions, the team caught fire and won nine straight against opponents like Butler, Boston, and East Tennessee.

For Petrovich, it was vital to see the team go up against strong opponents early on in the season.

“It’s always important to play the toughest schedule possible,” said Petrovich. “I think that’s the key to our success because we are not afraid to play anybody.”

In their final games before the NCAA Tournament, the Panthers participated in the Conference USA Championship. Their regular season performance earned them the second seed.

They defeated No. 10 University of North Texas in their first matchup 4-0, before falling to No. 3 Charlotte 49ers, 1-4 in the semifinal. The loss to Charlotte marked the second loss for FIU in over two months and was the first loss to a conference opponent.

Led by Conference USA Freshman of the Year Yasmine Kabbaj and the nations 79th ranked duo of senior Kamila Umarova and sophomore Andjela Skrobonja, the Panthers enter the tournament having won 15 of their last 17 matches.

Historically, FIU has a 4-10 record overall in the NCAA Tournament, making it to the Round of 32 four times.

In their last appearance in 2020, they suffered a crushing loss to Miami once again, 0-4. The highlight of the event was Umarova winning the first set against the nation’s No. 1-ranked singles player, Estela Perez-Somarriba. Despite that impressive victory, the Hurricanes wrapped up business and ended the team’s run in the opening round.

However, this year’s team is not the same as last year’s. Coach Petrovich believes that there are some key differences between the two squads.

“We have a better depth in our lineup and our doubles are much stronger,” said Petrovich. “So obviously, the team was much stronger than last year.”

The Panthers will look to advance to the next round where they will face the winner of the University of Florida and South Alabama matchup.