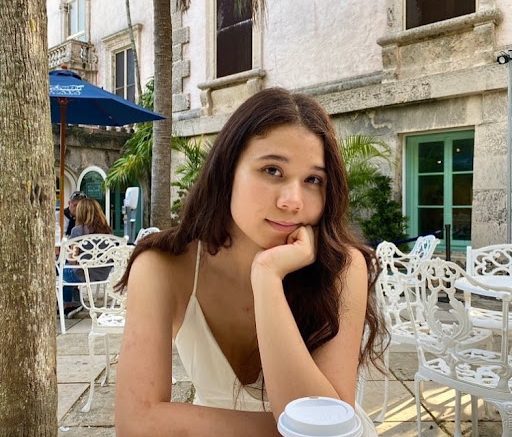 Hannah Kossoff, a 20-year-old Junior at FIU, wanted to try something new and follow in the footsteps of her parents who studied abroad. So, at 17, she packed up her stuff in her hometown just outside of Tampa and headed to France to study for a year.

The pandemic struck, and her stay was cut short to only eight months.

Her goal was to get an authentic French experience first-hand. She recounts her time in Allevard and Sète as an amazing opportunity to meet new people, learn the language, and create new memories.

But Kossoff said she felt lonely at times.

Her French was alright, but she tried her best to communicate. “The French students didn’t really talk with the international students that much, and I felt like I couldn’t really show my personality that well,” said Kossoff. “I felt like no one could really see who I am, so I made a YouTube channel and was able to express myself a little bit better.”

So, she began posting vlogs and taking her camera to school in France and filming day in the life videos as a way of self-expression during her time living with a host family in another country. Kossoff talked about how the experience was scary at first and there were moments where things got hard, “but I think it really challenged me in a good way,” she said.

And before she knew it, her YouTube channel began gaining subscribers.

After coming back to the U.S., it was time for Kossoff to apply for college. Her two sisters go to FSU and UF, but Kossoff didn’t want that small town feel.

She wanted to be able to continue her journey meeting diverse groups of people, so she applied and got accepted into her top school choice: FIU. She’s currently majoring in broadcast journalism with a minor in French.

“I feel like this school is really underrated,” said Kossoff. “I think FIU has a lot to provide.”

One day, she realized that there weren’t many YouTube videos about what it’s like to be a student at FIU. “I got so jealous because the schools my sisters go to have so many videos online about campus life,” she said. “I was like, why aren’t there any videos of my school?”

So, she took matters into her own hands and began producing content about FIU and the highlights of her life as a student there. She also posts videos to help other people decide which Florida school is best for them. For example, she has a video titled: “Should You Go to UM or FIU // Which works best for you.” She also films day in the life vlogs as an FIU student and cool spots to check out on campus or in the city.

“I think students find it helpful to know about their school before they go,” said Kossoff. “A lot of people don’t get the opportunity to go in person and check out their future school beforehand and do tours or meet real people, so it’s important they see this for themselves, even if it’s online.”

Her channel currently has 1.1K subscribers, and it’s still growing. The feedback she gets from her subscribers is a reassuring way for her to know she is really helping others decide whether or not to join the Panther family.

Many of her followers personally ask her FIU-related questions in the comments section on her videos.

One comment from Manny C. says “Hi! I’m in love with your channel, would you say you can have a personal relationship with professors or nah? Thank you so much! I’m planning on coming summer of next year” and Kossoff replied “Yeah, actually for a couple of my classes I do have a pretty personal relationship with my professors, never had a bad experience with them here.”

“It’s pretty easy to film here,” she said. “People come to [FIU] because they want to get a different experience from that homogenous American campus vibe.”

Because of this, Kossoff says students at FIU are nicer and more open-minded, making it easy to include them in her channel.

“Students choose to come here because there are people from everywhere,” she says. “People that want to meet others are more approachable and easier to film.”

Kossoff is a big advocate for studying abroad, and she feels that others can get that same type of self-growth by attending an international school.