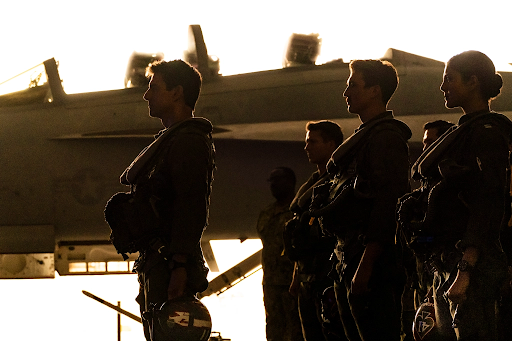 “Top Gun: Maverick” is not just a story that jabs at nostalgia to appease audiences; it is a heartfelt narrative of determination, will, and family.

In the sequel to the 1986 film “Top Gun,” Tom Cruise reprises his role as Pete “Maverick” Mitchell. He is tasked with instructing a new generation of students at Top Gun, the naval aviation fighter school he previously attended.

Many of the cast members did not come back for “Top Gun: Maverick,” with only Tom Cruise and Val Kilmer reprising their roles.

The film’s nostalgic elements grasp the audience, making the viewing a memorable experience for any fan of the original Top Gun. Kilmer’s presence made the audience audibly emotional, with sniffles being heard throughout the theater.

With a multitude of content that brings the crucial elements of “Top Gun” to a new audience, the film also keeps many of the same components of the original film.

The audible laughter from the audience can be heard in witty dialogue in the movie. Cruise’s clever quips give proof of his impeccable timing and range as an actor.

The parallels between certain characters from the 1986 film and “Top Gun: Maverick” are apparent throughout the attitudes of the characters and storylines in the film.

Rooster is a combination of both Goose and Maverick, following his father’s attitude and Maverick’s perseverance.

Rooster’s heroic decision to go back and save Maverick shows how much of his father he has in him.

Maverick always felt that Goose was his only family. He feels that he needs to do everything in his power to save Rooster the way he could not save Goose. He continuously finds himself reminiscing on times with his late best friend.

While Jennifer Connelly’s character was only briefly mentioned in the original Top Gun, her presence feels as though she had been there, playing a critical role in Maverick’s life.

The original score by Harold Faltermeyer is kept in the film, with no other music standing out. However, the score matches the ambience of the scenes, particularly in pivotal moments when the action becomes central to the film.

The aesthetically pleasing scenes in the film that include realistic visual effects contribute to the story’s action-packed segments.

The action sequences are a huge improvement from the first “Top Gun,” visual effects aside. The scenes build tension that unnerves the viewer while they continue to root for the mission’s success, with everyone coming out alive.

“Top Gun: Maverick” reinforces the central message from “Top Gun;” that family and life is more important than any mission.

Not many sequels surpass nor match the quality of original films. But “Top Gun: Maverick” is an exception in more ways than one. The cinematography consists of beautifully executed scenes whose color palette consists of darker hues that conveys the tension surrounding the relationship between Maverick and Rooster.

The acting makes viewers emotional, with Maverick and Rooster’s reconciliation making for a satisfying moment.

“Top Gun: Maverick” makes anyone want to be a part of the resilient team that recognizes the importance of their mission, while also prioritizing their lives and enjoying their time together as a family.

As audiences, we “feel the need…the need for speed!”