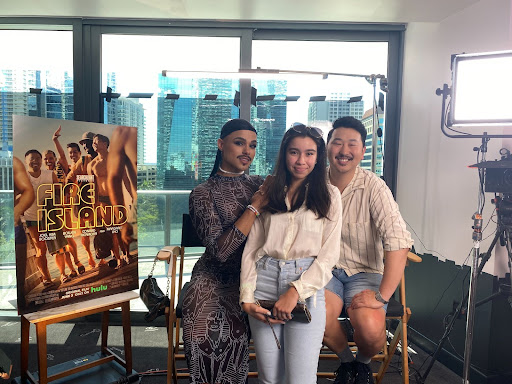 From the inspiration of Jane Austen’s classic novel “Pride and Prejudice” comes “Fire Island,” a story of identity, intimacy, and freedom.

Noah and his best friends take their yearly trip to Fire Island, a paradise filled with members of the queer community. There, they stay with Erin, played by Margaret Cho, the charismatic lesbian who acts as their mother. They make new friends and learn life lessons filled with unforgettable memories.

The film was shown in an advanced screening at Silverspot Cinema in Downtown Miami on Monday May 16, with director Andrew Ahn and cast member Tomas Matos in attendance.

The script was written by Joel Kim Booster, who also stars as Noah in the film.

The most prevalent aspect of the movie, though, is the representation that is beaming all throughout its entirety.

“The rejection in the queer community was well represented in the film. It does a good job of shifting the perspectives to our side,” says content creator Jonny On The Go.

“It was relatable. As a young queer person, it meant a lot to see yourself on the screen,” says creative artist Patent Pending.

The film makes audiences recognize the importance of queer representation in the media.

The ambience of the after party was similar to that of the film; fun filled with party music and a vibrant layout. Guests were treated to delicious finger food and paella, along with a photo booth featuring designs inspired by the movie.

In an interview with Ahn and Matos, the film’s meaningful purpose was revealed.

Matos’ presence filled the room with their charismatic personality. The character of Keegan lives in Tomas, in and out of the film.

“Keegan is very Tomas, to say the least,” they say.

When asked what it took to become the character, Matos said “The preparation for a role like Keegan is tapping into my most authentic self and being able to put them on display in such a freeing way.”

Matos felt the responsibility of playing a character who was confident in their identity and was never shy of showing it off.

“I feel like I’m touching a lot of spirits and souls out there that might also connect and represent in the world like I do,” they state.

“Once I saw the audition tape, I knew we had found our Keegan,” Ahn says.

The script was sent to Ahn by Booster, as they had known each other previously.

Filming began in August 2021 and lasted two months. On the filming process, Ahn states “I wanted to create an environment where we could feel safe and vulnerable so that we could be dramatic and comedic in the ways that we needed to for this movie.”

Although they ran into complications filming on Fire Island” at times due to intense weather, Ahn and Matos both expressed gratitude for being a part of the film.

One of the aspects Ahn is most proud of is a crucial message the film highlights through its unravel.

“I liked how it ultimately meant being about chosen family,” he states. Both Ahn and Matos conveyed the importance of surrounding oneself with a supportive community.

With themes of love, pain, and overcoming hardship, “Fire Island” contributes a voice to a community whose struggles are often overlooked.

“I think we all understand the meaningfulness of this movie and how special it was and I think that inspired us to do our best work,” Ahn states.