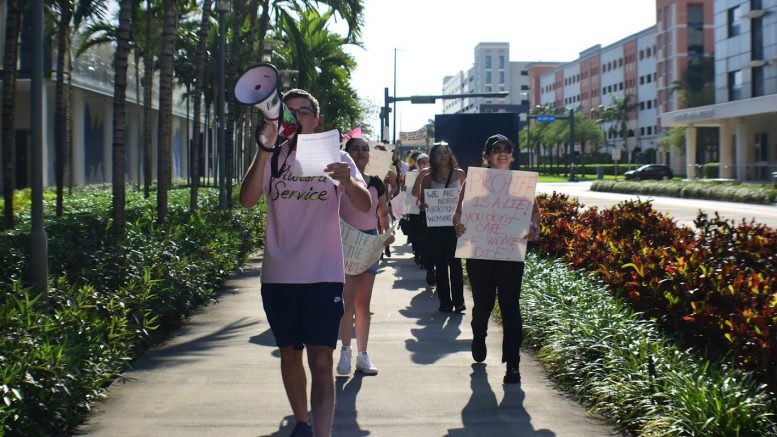 On May 6, demonstrators in support of Roe V. Wade marched toward the outskirts of the campus. / Julian Davis, PantherNOW

Following the leaked Supreme Court draft decision portending an end to the landmark Roe v Wade ruling after 49 years on May 3, FIU Students, alumni and non-students gathered in front of the Graham Center on Modesto Maidique Campus on Friday, May 6 to express their views on abortion and reproductive rights.

Shortly after the decision was leaked, a protest in support of reproductive rights was announced by the Office of Women in Medicine and Science at FIU, with support of the Young Democratic Socialists of America FIU chapter.

Days later, a counter-protest in response to the original protest was organized by Catholic Panthers, a Catholic student organization, and College Republicans at FIU. FIU Police officers were assigned to separate the two groups, leading to little if any interaction between them.

“I think it’s really important that we’re here today and are gathering because we need mass attention to this issue,” said Vivian Ramos, a senior studying Biology and vice president of the Office of Women in Science. “The majority of Americans are pro-choice and it’s crazy that a minority is going to put lives at stake.”

“NO UTERUS, NO OPINION” was a sentiment shared by several pro-choice demonstrators. / Julian Davis, PantherNOW

Pro-choice protesters called attention to the importance of reproductive rights and the risks of removing federal protection against legislation restricting legal abortion.

“The decision of a minority will deny medical treatment to women who need abortions; cases of ectopic pregnancies, or cases of rape or incest,” said Ramos.

“States have trigger laws that will go into effect once Roe V. Wade is overturned. A lot of women in these states, in many cases in impoverished situations, can’t support children. They don’t have access to contraception and might need an abortion and are being barred of medical attention,” Ramos said.

Pro-abortion protestors marched peacefully through the building of Science and Chemistry and across 8th Street into neighboring Sweetwater, returning to the Graham Center lawns through University Drive. FIUPD accompanied the march throughout the entire route and stood between the two protests as they passed.

Natalie Rivera Vaca, a former FIU student and a mother of two, agrees with the right to terminate a pregnancy as well as the need to increase sexual education.

“For me being pro-choice doesn’t mean that everyone has to get an abortion,” said Vaca. “It’s about not forcing anyone to have children if they don’t want to.”

Valeria Gonzales, a Colombian student who attends Broward College, came to the United States five years ago. She expressed her frustration of abortion rights being at risk in the U.S. at the same time as abortion rights are being increased in Latin American countries like Colombia, a deeply Catholic nation whose constitutional court legalized abortion up to the first 24 weeks of pregnancy in February.

Last year, Mexico also expanded reproductive rights by ruling that penalising abortion was unconstitutional, following similar policy efforts in both Argentina and the Republic of Ireland.

Krishna Cowing, a Senior studying Economics and YDSA-FIU member, believes that Americans should become more involved in defending their rights.

“This is an example of how the government dedicates its time and resources to militarization and economic interests instead of hearing people’s voices and their concerns,” said Cowing.

For Cowing, protests and public demonstrations are just as important as voting to make politicians respect people’s interests.

“Democrats who are mostly pro-choice control the Presidency, the House of Representatives and the Senate, and look where we are today,” said Cowing. “So it is not enough to vote, we have to get out in the streets.”

Nearing the end of their first march of the day, pro-choice demonstrators pass through one of the Academic Health Centers while heading back to the Graham Center Lawns. / Julian Davis, PantherNOW

Decided in 1973 by a 7-2 vote, the Supreme Court’s favorable ruling over Roe v. Wade established that women had a fundamental right to elect to have an abortion, effectively striking down a Texas law which restricted the operation except in the case of a life-saving procedure.

“Due to Roe V. Wade, states are not allowed to take the constitutional right of accessing an abortion away from you,” said Dr. Susanne Zwingel, a professor in the department of Politics and International Relations. “If that standard is not there anymore, states can basically go their own way.”

Thirteen States have passed ‘trigger laws’ aimed at banning abortion services in the eventuality that federal protections under Roe V. Wade are ruled unconstitutional. One of those states is Florida, where a Republican-dominated State House recently passed legislation that prevents patients from terminating their pregnancy past 15 weeks, or the second trimester.

“Most abortions happen before week fifteen, which, in my mind, is actually a reason to not set that time limit,” said Zwingel. “It’s only a very small percentage of women who get abortions after fifteen weeks and it’s typically women in very, very dire situations.”

Joelle Peña, a Senior at Ransom Everglades School who was present at the protest, said she felt that the Supreme Court’s ruling was actually government overreach itself.

“I think ultimately the Supreme Court should rule that we have a constitutional right to life, and that it should be illegal nationwide to provide an abortion,” said Peña. “But at the very least the ruling to overturn Roe V Wade and leave this decision up to the states is a good and just decision.”

Improved sexual education and discussing these topics openly is the only way to reduce abortion rates, according to Zwingel, whose research specializes in women’s and gender rights globally.

Of the dozens of so-called “developed nations”, the United States ranks first in rates of abortions, teenage pregnancies and sexually transmitted diseases. Only 38 of 50 states have legislated sexual education in their schools, and 30 of those center abstinence from sex until marriage rather than the use of contraceptives in their curriculum.

“Countries with the lowest abortion rates are typically countries that have widespread sex education, widespread access and information about contraception and access to abortions and support for young parents to raise children.”

“It’s not that they were killed; it’s a sacrifice”

Especially for religious and conservative activist movements, the potential overturning of Roe V Wade is the result of a decades-long fight against federal protection over abortion rights.

Two counter-demonstrators hold up part of a banner that reads, “God creates every life for a reason! CHOOSE LIFE.”   / Julian Davis, PantherNOW

Titled “Pray to End Abortion at FIU”, the May 6 counter-protest in favor of banning abortions largely consisted of prayers, hymns and testimony exchanged by nearly 25 participants–both students and non-FIU affiliated community members.

Members of 40 Days for Life, an international anti-abortion group that often stages fasting and prayer sessions outside of clinics that provide abortion services, were also present.

Arturo Turno, a graduate student who self-identified himself as a Catholic, said he was there due to his concern for a society which allows abortion.

“When it comes to the abortion issue, I don’t know how to fight for it. I just prefer if nobody sacrificed babies. It’s not that they were killed; it’s a sacrifice,” he said. “The idea of Catholic is exactly what I want to be, and saving life from any danger is what you need to do. If you don’t help society, you can at least pray for it.”

When asked to what end these sacrifices served, Turno cited an increasingly popular conspiracy theory relating to abortions in the United States.

“I follow this Instagram page, and some Instagram pages you’re bound to not trust them,” he said. “But one that was pro-life said that they were making energy from the corpses of fetuses. And I didn’t question at the moment whether it was true or not, but I just went into a deep state of meditation, and then I just said, ‘That’s true.’”

Members of 40 Days for Life and other counter-protestors form a prayer circle in front of the Graham Center Ballrooms with crosses and or signs in hand. / Julian Davis, PantherNOW

Most recently, conspiracy theories centering around abortions have found their way into the fringe, far-right Q-Anon conspiracy camp, where proponents claim abortions are performed to profit from the trafficking of aborted fetal limbs or to power the electrical grid of Washington, D.C.

“That I have heard about,” said Junior Gabriella Garcia, a communications major who was also part of the gathering. “I haven’t actually looked into it personally, but I don’t think it’s beyond the pro-choice movement to support that.”

As many as four days a week Garcia and Peña, who identified themselves as Protestants, visit reproductive health clinics across Miami to plead with patients outside of the entrance. According to the names of the clinics provided during the interview, each clinic publicly claims to provide numerous sexual and reproductive health services aside from abortions.

“We usually ask women as they walk in, ‘Are you pregnant today?’, or ‘Are you keeping your child?’, so we try not to assume as much, but most women lie and say that they’re not there for an abortion,” said Peña. “So many times we kinda do speak to them as if they’re getting an abortion, just with the caution that they may not be.”

“We also tell other patients who are not there for abortion services not to give clinics their business, because the man who owns the whole building is the abortionist,” she said. “Ultimately, we want any clinic that provides abortions regardless of other services to be shut down.”

According to Garcia, the pro-life movement’s struggle to ban abortions is one of urgency.

“It’s the most immediate and pressing issue in our country at the moment,” said Garcia. “It affects the lives of millions and millions of babies each year, and I would consider it akin to the Holocaust because people are being considered inferior because of their physcial characteristics, because of the way they look, the way that God has created them.”

Garcia then likened abortion to murder, reiterating that those who either undergo or provide abortions exist on the same moral plane as Nazis and should be charged with first degree murder.

“The crime of murder based on somebody’s physical characteristics is basically the same thing. We’re not putting people into gas chambers by the thousands, but we are poisoning them from inside of the womb; we are surgically removing them from the uterus limb from limb,” said Garcia.

In the wake of the leaked Supreme Court draft concerning the striking down of Roe v Wade, several state governments, including Texas and Louisiana, proposed legislation which would establish the death penalty for anyone who provides or undergoes an abortion. In Louisiana, the measure ultimately failed in the state house.

Currently, no country in the world exercises the death penalty for abortion, although nations such as Iran, El Salvador and numerous others contain provisionary life sentences. In the same manner in which the legal status of abortion services will be left up to states should federal abortion protections be revoked, penalties will also be left to each state.

To Zwingel, these laws will put the wellbeing of pregnant people in jeopardy.

“There are many countries around the world where abortion is criminalized under all circumstances, or only legal under very narrow possibilities. In those countries women will still have the need to have abortions,” Zwingel said. “When talking about abortions we are talking about a health issue; we are looking at women dying that don’t need to die.”