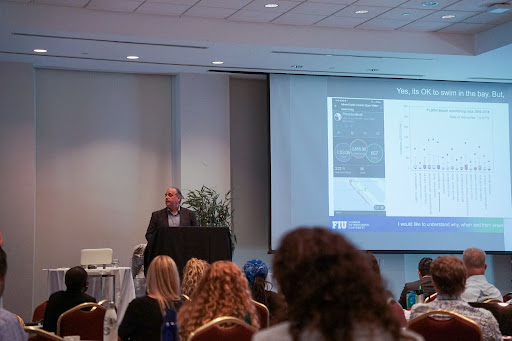 “The health of Biscayne Bay is in a state of emergency,” said Cava “Sadly, shortly after [the release of the Biscayne Bay Taskforce report] we experienced the fish kill and algae bloom.”

The Biscayne Bay Taskforce was an expert advisory board created in 2019 to analyze available data regarding the condition of the Biscayne Bay ecosystem. They provided a set of recommendations regarding water quality, stormwater management and habitat restoration in August 2020.

Piero Gardinali, director of FIU’s Institute of Environment, states that the bacterial population in the bay has seen significant growth during the last year. The reason behind this is still unclear, but hypotheses point to higher than usual phosphorus levels in the water.

“We can only manage what we measure, it’s impossible to manage things we can’t measure,” said Gardinali.

Current technology used to assert water quality and nutrient contamination are based on the measurement of phosphorus concentration in the water, which according to Gardinali is not suitable for modern standards.

This higher than usual bacterial growth decreases water quality and stalls seagrass growth in the Bay.

“Since 2009 we have seen that seagrass density has gone down and since then we haven’t seen a significant recovery,” said Pamela Sweeny, senior manager of Water Resources of Miami-Dade.

According to Sweeny water clarity is necessary for seagrass photosynthesis. This decrease in seagrass population in turn reduces the food that native species need to survive.

Another issue pointed out by several speakers is the centralization of water flow and phosphorus concentration data.

These variables, which are invaluable for determining water quality in the bay, are released periodically and mainly measured by Miami Dade authorities.

“We need to address the critical data gaps we have,”  said  Dr. Todd Crowl, director of FIU’s Institute of Environment, speaking about the need for real-time, free access and decentralized measurement platforms of water flow and phosphorus concentration.

The concentration of plastic in the bay is also a cause of concern. According to Gardinali, county authorities are only able to measure plastic floating on the surface of the water while a significant part of the plastic that ends up in the Bay tends to sink.

Current measurement techniques are also unable to measure the concentration of micro-plastic in water.

Kallie Ralston, a representative of the Bonefish and Tarpon Trust organization, reports that during 2021 the Biscayne bay has seen significant habitat loss and a higher than usual manatee mortality rate.

According to Ralston, Polychlorinated Biphenyls (PCBs), highly carcinogenic chemical compounds, have been found in dolphin populations on the bay.

Ralston also highlighted the 51 different pharmaceuticals in fish tissue that live in the bay. These pharmaceuticals generate behavioral change and decrease survival rates.

“We are really concerned by the effect that water quality is having on our fisheries,” said Ralston.

In a pre-recorded speech Cava said, “Those incidents vividly illustrated the dire state of the bay, brought a new sense of urgency and made Biscayne bay recovery a priority.”