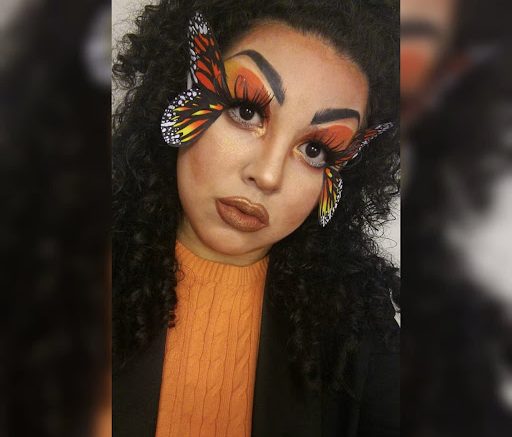 Moving to a new country without speaking the language or understanding the culture is a challenge many South Florida students face. For one FIU student, art was the way she was able to express herself in a new country she was unfamiliar with.

“Being an immigrant is difficult, moving to a country where the native language is English and your native language is Spanish is even more difficult, but with my art I have been able to express words and messages that I cannot convey with phrases or sentences. The best way to enter the world of art is to immerse yourself in it,” said 23 year old artist Debora Rodriguez.

Rodriguez, a Honduran native, has been studying in the United States since 2018. Her career began at Miami Dade College where she graduated with her associate of arts, and decided to continue her educational career at FIU, where she is currently completing her bachelors in fine arts.

Coming from a humble family and despite being born in a country far from the United States, Rodriguez never stopped chasing her dreams. Her passion began at an early age with inspiration from who family, who are singer and musician, and the ones who always surrounded Rodriguez around art.

With her family and heritage being her biggest inspirations, much of Rodriguez’s work pays homage to her roots.

“My art represents my family and culture,” said Rodriguez.

Rodriguez has participated in art contests at The Association of Bilingual School (ABSH) in Honduras where she won first place in drawing area 2 and in the following years she participated again and placed in the top 3 of finalists.

When she graduated from high school, the school recognized her great effort as an artist and was invited to attend the art club where her leadership and her performance as an artist and painter emerged.

When Rodriguez made the decision to come to study in the United States she never thought about the opportunities that were presented to her throughout her career.

Currently Rodriguez is president of Phi Beta Delta where she supports international students who have come for the same dreams as hers. She was in charge of globalization and international relations between people. She surrounded herself with people with different cultures than her, met with the dean so that international students had a voice in the university, and also did a lot of volunteering like cleaning beaches and picnics.

Rodriguez’s work is inspired by artists such as Remedios Varo, her favorite artist. Her greatest example to follow, Salvador Dali, has also been a source of inspiration for her paintings. She sits by Nelson Salgado because he comes from Debora’s country and represents her as a Honduran and an artist.

She was also part of Metromorfosis, a student creative art publication, where Debora sent her work monthly and received several publications. She competed with several people to get published, she fought and succeeded.

“Getting these opportunities in the United States has made my art more valuable and more recognized in the city of Miami,” said Rodriguez.

In 2020, Rodriguez started working with Kerry Phillips, an artist who works with installations whose work blurs the lines between activities and social activism. Phillips’ found element art is spontaneous, frequently homepage, and filled with memories and storytelling.

Rodriguez and Phillips  love working towards different art installations and one of those places was Miami Design District. She also worked at Dimensions Variable Art Gallery located in Little River where she made preparations for opening shows and  gallery walks.

In 2022, Rodriguez did an internship with Regina Jestrow, an artist from New York, based in Miami who works with textiles. Debora prepared the art gallery for the shows and communicated with different artists to reach an agreement for installations of sculptures and works.

“My Latin culture will always be part of me anywhere in the world, I like to share and demonstrate about the impact that Latinos have in the world, and what better way to do it through art” said Rodriguez.

Rodriguez has made showcases of her paintings at FIU as the culmination of her painting course. Debora transmits with her paintings the solidarity and union of families, as she likes to show her family through the art she makes. She has also made paintings representing her country and Latinos where she shows ethnic groups, flora, fauna, instruments and historical structures. She seeks to make people see that through art we can make other people have representation of their culture and where they come from.