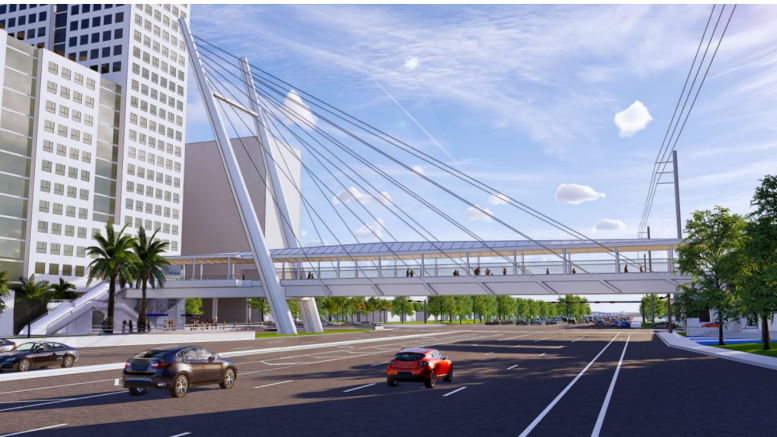 The Florida Department of Transportation (FDOT) has released designs for a new pedestrian bridge four years after the previous one collapsed during construction, killing six, including an FIU student.

FDOT will manage bridge design and construction, with FIU and the City of Sweetwater listed as local partners. FIU will own, manage, and operate the bridge upon completion.

Funding for the bridge will come from FIU, the City of Sweetwater, and some federal and state funding. The current budget for the project is $15.5 million.

Currently, the design is about 60% done. According to FDOT project manager Humberto Gomez, predicts the design will be finished in late December 2022, with construction beginning in 2024 and expected completion by 2026.

“We expect to complete the project in the spring,” said Gomez.

The bidding date for construction is scheduled for April of 2023.

The former bridge collapsed after using “accelerated” methods for construction, as well as using a concrete design that was considered cutting-edge at the time.

The new 191-ft. bridge will use traditional steel girders instead and be done in six phases using more conventional construction methods.

“This is a traditional, conventional bridge construction,” said Kathy Lejo, consultant design project manager. “It’s similar to other bridges you see across Florida.”

The bridge will include a canopy, elevators on each side, and security cameras.

Because the bridge will belong to FIU after completion, the security cameras will be connected to FIU Police Department.

“It’ll be just like any other property we have,” said Captain Delrish Moss. “If it’s in the same place, it’ll be a prime location because the police station will be right there.”

During construction, Eighth Street will close various lanes, with full closures during the last three phases. Closures will be scheduled during non-peak hours, from 10:00 p.m. to 7:00 a.m. Speed limits are expected to stay the same during construction.

Additional parts of the project include closing the existing historical bridge over the C-4 canal,  getting rid of the north-south crosswalks at the SW 8 St and SW 109 Ave and providing east-west crosswalks along SW 109 Ave.