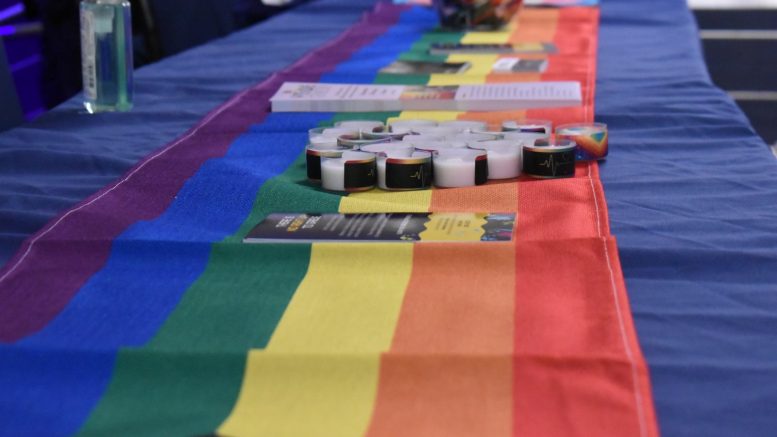 Candles in memory of those lost / Julian Davis, PantherNOW

Pride Center hosted a vigil to honor the lives lost in the Pulse nightclub shooting on June 12, 2016.

The vigil, which was held in the Graham Center pit, is the first vigil held fully in-person since the start of the pandemic.

Lasting just a few hours, the vigil began with a speech by the Pride Center associate director Erice Jayne Friedman, who discussed the importance of the vigil and remembering those lost to gun violence.

CAPS members were in attendance to speak to students who felt personally impacted by the tragedy.

Other notable speakers included Pulse survivor Brandon Wolf, who spoke about his friends Juan Guerrero and Christopher Leinonen who were both victims of the attack, as well as MJ and Fred Wright, the parents of Jerry Wright, a victim of Pulse and alumni from FIU.

“People start going back to forgetting about what happened,” said Friedman in discussing the importance of remembering those lost to gun violence. “We feel it’s important [holding events like this] because there are so many people in the community who are directly impacted by this.”

Besides highlighting the tragedy directly, Friedman also spotlighted two FIU students who were both recipients of the scholarship from the onePULSE foundation, Luis Moros and Amelia Leon, who spoke with PantherNOW reporter Julian Davis about their experiences as LGBTQ+ students and what the vigil meant to them.

As a part of the scholarship, there are 49 recipients for every life lost at Pulse, and every student is paired with a victim, which they call angels, in order to carry on their legacy.

Students selected also meet with the angel’s family, learning more about the person they represent.

The vigil comes at a pivotal time following Uvalde and Buffalo, which were also acts of tragedy against Black and Brown communities.

“I think it’s at the forefront of people’s minds right now,” said Friedman. “People want to do something…so they are more motivated to come out for something like this.”