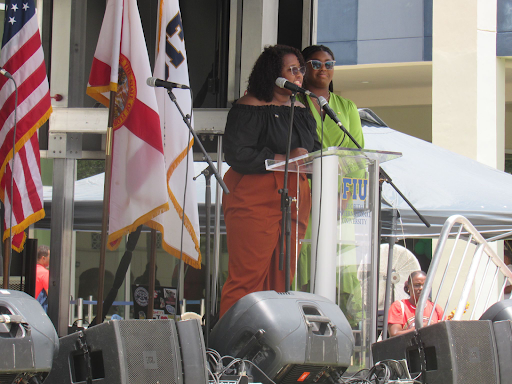 Two of Albert Dotson’s granddaughters, VerShona Dean and Briana Hall, speaking on the legacy of their grandparents at the Juneteenth Freedom Day Celebration. / Alexander Lazula, PantherNOW

FIU celebrated Juneteenth this past week for the second year in its history, observing it through a week of festivities, lectures, classes and events.

Officially recognized as a federal holiday in 2021, the occasion marks the date when Union general Gordon Granger proclaimed freedom for enslaved Blacks in Texas, the last state to uphold slavery, in 1865. Over 150 years later, Juneteenth remains a culturally significant and important celebration for a large part of FIU’s student and faculty population.

The theme of this year’s activities was “Educate, Celebrate, Heal.” This year’s Juneteenth Committee co-chair Laura Lopez-Ramos says the objective wasn’t to give people a day off, but rather a day on.

“We needed to raise awareness for Juneteenth, we needed to educate our community, and we needed a space to celebrate,” she said.

“I think that’s when we tied in our theme of ‘Educate, Celebrate, Heal’, because more than giving people a day to go to the beach, we’re giving people an opportunity to connect to our history; with a very important part of American history that for the longest part has gone un-talked about or unnoticed.”

This year, the holiday was commemorated by the inaugural Nova Star Juneteenth Scholarship Pageant on June 11th, as well as the second annual Freedom Day Celebration, held on June 18th at the Earlene and Albert Dotson Family Pavilion.

The pageant consisted of six contestants selected from a pool of over 50, who were judged on five categories. The winner, Teddishea Mackey, was awarded a $2,000 scholarship and the title of Nova Star Ambassador.

“It feels amazing, actually getting to make history as the first Nova Star winner at FIU,” says Mackey. Despite her nerves, Mackey came out on top and attributes her victory to the support of her friends, family and faith.

“If you were to look at the Juneteenth flag, at the center of the flag is a star that represents the Lone Star State. On the outer perimeter of the star is a bursting star, which astronomers note as a nova star,” Brooks said.

The Freedom Day Celebration featured several performers, including The Roar Marching Band of Florida Memorial University performing a medley of popular tunes, as well as student singer Toni-Rae Forbes, who performed the Negro National Anthem, Lift Every Voice and Sing.