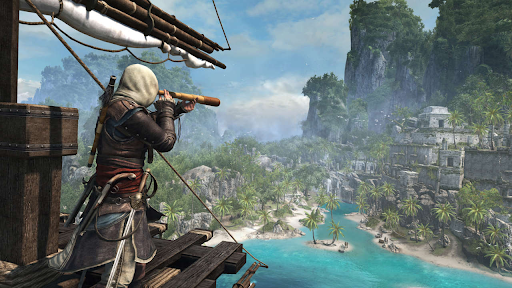 “History Through Gaming” will be the first course at FIU focused on the relationship between history and video games. Students will learn while analyzing and engaging with multiple types of video games.

Proposed and designed by Dr. Lindsay Maxwell, a scholar who specializes in religious and cultural history, this course will be introduced in fall 2022 as a junior history seminar and during spring 2023 as a regular class that can be taken as an elective for history and non-history majors.

This new course aims to examine how history has been portrayed in video games, how historic events shape the creation of video games, and how games affect how history is consumed, learned, and perceived today.

This course will require students not only to read books and articles but to play classic video games such as  “The Oregon Trail” (1970), a text-based strategy video game, and more modern ones like “Assassin’s Creed IV: Black Flag” (2013), an action-adventure video game set in the Caribbean during the Golden Age of Piracy, or “Red Dead Redemption 2” (2018), a cinematic revisionist Western.

Students can access these games either through a Steam account on a PC or through home consoles. However, if a student cannot access one or several of the games required, they can get access to them during class time and through playthroughs.

Maxwell grew up playing video games such as Age of Empires and was already familiar with historical video games when she first started designing the course. During her interview with Panther Now she explained in more detail the origin of the course:

“In conversations with my students, I started picking up on certain things. For example, some students would say: Oh, that reminds me of what I saw playing ‘Red Dead Redemption,’ or this reminded me what happened when I was playing ‘Age of Empires,’” said Maxwell.“So it was through those kinds of conversations organically that I started to think that this is another way to engage with students where they are when it comes to learning about history.”

There are multiple precedents in the use of video games as tools for teaching. Edutainment video games like “The Oregon Trail” gained popularity in the 70s and are still used in elementary and middle schools to teach multiple subjects and even things like coding. Notwithstanding, using video games to teach history in a college is not common practice and has not even been considered until recently.

According to Maxwell, this comes from the fear of causing confusion or misrepresentations to students:

“There’s a little hesitancy on using games in history. There always was and still is hesitation with using things like film right to teach history because everybody gets caught up on how accurate is a representation? Are people really learning  accurate history from this, or is this just confusing?”

However, novels, films, and video games are used as primary and secondary sources for studying history, and the challenges in their use to study history are the same when it comes to accurate representation and historical revisionism.

To avoid or reduce the risk of misinterpretation there must be a fundamental understanding of the interpretative nature of the field.

“History is the facts about the past evidence, but it’s also interpretation,” said Maxwell.

Red Dead Redemption 2 open world can be particularly illustrative of the early 20th century US West. Rockstar / Via the New York Times

Video games (just like novels or films) are also informative about the times in which they were produced and can help students understand current or past trends in the culture that produced them.

“To some degree, history is always an expression of the present moment, too, because it’s taking whoever’s writing that history, bringing in whatever’s going on at that moment into that interpretation of the past,” Maxwell said.

When asked about the real differences between using videogames as sources or objects of study Maxwell said:

“When you add all the other elements that come with games, it’s not just audio visual sound, it’s also simulation. You have a user now that can potentially change the course. It’s not a linear narrative anymore. And you can change that as a user playing a game. So this added layer of complexity makes it I think it gives it a lot of potential.”

“Sid’ Meier’s Civilization 5” will also be part of the required games for the course / Electronic Arts, Via Steam

Besides the immersion and complexity that video games can bring to the study of history, Dr. Maxwell has hope for the impact they can have on students, their desire to work as historians, and the possible changes they can have in the profession if introduced correctly in it.

“Another element of this, it’s really exciting is that this is opening up all kinds of new opportunities for students who maybe they aren’t really sure if they want to get major in history … you can do all kinds of things now,” said Maxwell. “We have game companies hiring historians because they need that kind of information and that knowledge. It’s an exciting new world that this is opening up.”

DLC is evil – here’s why