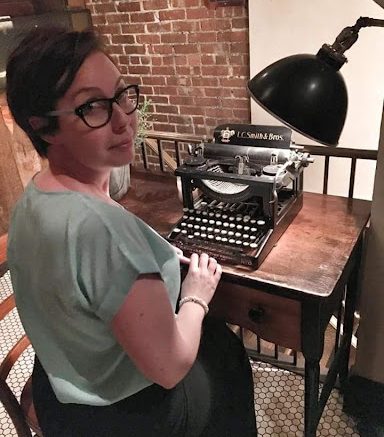 Here’s part two of Herstory, a series about FIU panthers changing the world and making history.

Kristin Gallagher, a creative writer and FIU Alumni of the Masters of Fine Arts program, found a passion for writing that led up to her student career as a managing editor at Gulfstream, FIU’s Literary Magazine for graduate students in creative writing.

Here, she found a sense of community through spirited meetings with passionate readers and diligent volunteers. Her editorial calendar kept her grounded, giving her a way to keep structure in her program while navigating how to finish and defend her thesis.

During her first year at FIU, she focused on heavy coursework in literature theory, pedagogy, and workshops. Her second year she began an independent project with Associate Professor of English, Julie Wade, reading and dissecting memoirs.

“It is a privilege to study creative writing. The future looks however you want it to. If you can’t imagine doing anything else but being a writer or a teacher in writing then follow your path in the Masters of Fine Arts Program at FIU,” said Gallagher.

Gallagher, a Boston native with Irish roots, curated her life path despite losing her mother early on. She was the eldest of eight children and a first generation college student. She graduated from Boston College with a Political Science degree in 2005 and a passion for gender justice.

After living with her sister in Cape Cod for two years, she attended Brooklyn Law School where she earned her Juris Doctorate with Honors.

During law school, Gallagher held a variety of internships focusing on domestic violence in court, international criminal court, issues related to women, sexual, and gender-based violence and ran a helpline for health insurance consumers during the Obamacare era.

One day she decided that it was time for a change of atmosphere and spontaneously quit her job and packed everything she owned into a Nissan rental car to move to Miami Beach with her pug and her brother Paul.

“Miami is an interesting place. Once I landed here, I believed I found my geographical cure. That yoga under the palm trees in paradise would solve all of my problems,” Gallagher said.

She moved here with zero attachments to family, a job, or a relationship, which liberated her from her previous life that was heavily influenced by those attachments.

While in Miami, Gallagher explored her passion for freelance writing but still felt a little lost.

“I had been working toward this notion of what I considered to be success. I have a graduate degree, a good paying job, won awards and accolades and it was all lovely but still felt like happiness was elusive. I landed in Miami and suddenly I had all this time,” said Gallagher.

She explored masters of fine arts programs and discovered that FIU was one of the only schools in Florida that offered creative nonfiction and an opportunity to write her thesis project as a creative memoir.

Although she initially joined writing groups to meet other writers, they made her very introspective.

“What will I do with this book I’m writing? Will I make it in Miami? It’s not easy integrating into a place as fleeting as Miami and for me, despite my accomplishments, I felt that pride was standing in my way,” said Gallagher.

She began her very first journal entry when she moved to Miami, in early 2018. She faced doubt coming in her mid-30s with no community connections to start a new degree or career, leaving her questioning if she was leaving law forever.

“I’m a lawyer, of course I can write, but I had to learn to write creatively,” said Gallagher.

Finding community at FIU was challenging for Gallagher as two years were remote due to COVID-19.

One way she found community and inspiration was through her literature professors Mark Kelley, Ph.D. who taught a literature course on Disabilities Across Disciplines, and Aza Weir-Soley’s course on Major American Literary Figures. She also  participated in the Annual Audre Lorde and Toni Morrison Conference.

She learned that literature theory and cultural critique can provide a framework for removing barriers to accessibility.

Prior to graduation her goals were focused on becoming a better writer. She gradually developed a chapter in her memoir class with Professor Wade that ultimately informed her writing.

“The book was an act of discovery that I wasn’t aware of upon entering the program. I have a better understanding of who I have been, the struggles I have lived with and how I chose to use that experience as I continue to figure out what my contributions are in this world,” said Gallagher.

She’s currently a contributing editor at The Seventh Wave while working on her next memoir and working to find a job that combines her passion for law and advocacy with her writing skills. As of now, Gallagher has been published in Cape Cod Times, Lunch Ticket, and South Florida’s literary journal, Saw Palm, with hopes to publish her next memoir in the coming years.