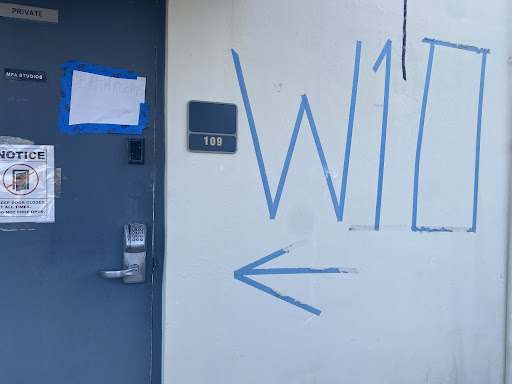 Painter’s tape on the outside of an art building. / Izzy Cazinares, PantherNOW

Black mold and rats have been found in several art buildings on the Modesto Maidique Campus since fall 2021.

The poor conditions prompted art students to come together in solidarity by creating a petition in hopes of improving their work conditions. Dwindling supplies, safety concerns and a lack of regular building maintenance are among their main concerns.

So far their petition has 177 signatures.

Over 50 student artists across multiple disciplines have come together in the chat to advocate for changes to their study conditions.

Neuman said her concerns began when she switched majors from journalism to graphic design in Spring 2021, when she quickly became disappointed with the state of the classrooms.

“We’re literally the stereotype of starving artists at FIU,” said Neuman. “We’re working with scraps of charcoal and chalk.”

Faculty also began to raise complaints at the time, especially when required to fund supplies for classes out of pocket.

Neuman met with Brian Schriner, College of Communication, Architecture and the Arts Dean in September to discuss the overall maintenance and safety of the buildings.

Several other students expressed concerns over safety while walking to classes in the art buildings, which are located in the southwest corner of campus and back up onto a major road and Tamiami Park.

A map displaying the MMC FIU Campus and the art buildings, which lie quite far from the rest of campus and near a major street / Via FIU.edu

“The outdated buildings have a very scary atmosphere because they need to be cleaned and repainted,” said graphic art student Rachel Gordon.

“It’s a common joke that they look like a nice place to get stabbed when you find them.”

In her conversation with Schriner, Neuman mentioned the presence of black mold in classroom W09 120.

Black mold found in a closet in the W10 building. Facilities Management claims it occurred due to an exterior door left open for an extended period of time. / Izzy Cazinares, PantherNOW

Neuman was informed via email after the meeting that FIU Facilities Management was in the process of fixing the issue, and that testing determined the mold was caused by an exterior door left open for an extended period of time.

“Every indication that we’ve been given from facilities management and environmental health and safety is that the mold that was found was completely eradicated and did not cause any other permanent damage,” said BJ Duncan, CARTA facilities director.

While providing PantherNOW a tour of the facilities in February, a rotting air conditioning vent filter was discovered by the reporter, and its nearby maintenance record denoted that it had not been changed since October 2020.

It was ultimately fixed on April 11th, two months after the initial complaint was made.

Rusted air-conditioning filter that had not been replaced since October 2020, when the last work order was filed. The filter was ultimately replaced in late April.Izzy Cazinares / PantherNOW A maintenance record displaying the last three work orders were placed to replace the rusting air-conditioning filter–June 29 of 2020, October 20 of 2020, and on April 11, months after the complaint was filed. Izzy Cazinares / PantherNOW

In response to the concerns over student health and regular building maintenance, Duncan said his department will be looking into conducting regular maintenance checks to prevent future issues.

“For the most part, any sort of departmental work orders and day-to-day items are called in by the different safety managers here to the Facilities Management department, and they come out and fix them,” said Duncan.

In the same follow-up email, Duncan said he planned to speak with campus security regarding safety around the art buildings.

“Once a plan has been presented, [Schriner] will share what our actions will be moving forward,” said Duncan.

In an interview with Duncan and Schriner prior to spring break, both claimed that multiple projects were underway to improve several of the buildings that host art students, including structural changes to Viertes Haus and the W buildings.

Duncan said he expects renovations to the flooring, gallery spaces and lighting in the art school buildings to begin over the summer and finish by the beginning of fall semester. Once funded, the project is expected to take anywhere from 6 to 12 months to complete.

As of now, Viertes Haus is under construction and all functions of that building have been moved elsewhere. However, other than a new paint job to the W10 buildings no changes have been made to the W10 and W10A buildings or its surrounding security.

“I can’t believe it…they need to get it done as soon as possible, especially since there is another rat infestation in one of the art buildings,” said Neuman.

Pictures of the rats in one of the art buildings running from the closet across the room. / Izzy Cazinares, PantherNOW