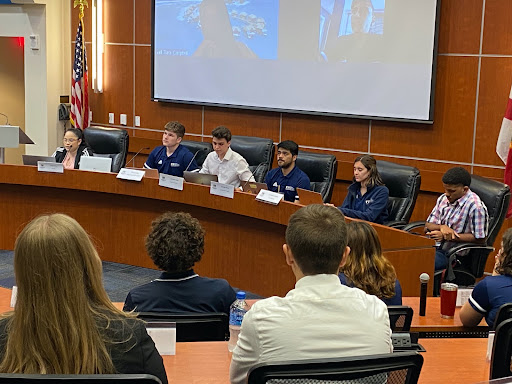 The Student Government Association Senate passed the PRES Act, a list of characteristics the SGA would like to see in the future FIU President.

The act, voted on during their last meeting on June 20, follows the presidential search committee’s publishing the list of their criteria for applicants on their website.

Following the departure of former president Rosenberg, the FIU Board of Trustees appointed interim president Kenneth Jessell to take over the position while they look for a replacement.

BOT created the Presidential Search Committee in April, and currently the search committee is in the process of going through the applications and making a list of top applicants.

The resolution SGA has made, while it shows student support and lists what students would like to see, is not binding on the search committee.

What initially started as a list of seven suggestions grew to be 10 thanks to amendments pushed by CASE senator Delano Cicconi and Housing senator Mia Rodriguez.

Senators focused on a variety of issues to include in their suggestions. Many believed the future president should focus on relating to the students and work to become an FIU icon. Others believed they should push for sustainability initiatives, as well as push for involvement on the campuses, supporting Greek life and FIU sports, and more.

Cicconi argued for an amendment that would call for the incoming president to have some Spanish fluency or make an effort to learn conversational Spanish.

“I think more than 65% of our student body is a Hispanic super majority,” said Cicconi. “So knowing Spanish is a priority for me.”

The amendment would pass following a slight revision removing the call for prior Spanish fluency, but reaffirming the need to become conversational in Spanish as a show of respect to the uniqueness that is FIU as a Miami-based and minority-serving institution

Rounding out the list was Senator Rodriguez’s additions, both centered on the relationship between the future president and student organizations.

One of those amendments stated that the next president should familiarize themselves with the many teams and clubs on campus. This came as a revision from a previous suggestion that solely focused on Greek life.

“I feel like just having Greek life and academics highlighted wasn’t fair to all the other stuff FIU has to offer,” said Rodriguez.

Rodriguez also called for the future president to set aside their personal beliefs in order to display appreciation for the multiple cultural identities the campus has to offer.

“I made sure to include that the President prioritizes inclusivity on campus by setting aside any political, religious, or personal beliefs,” said Rodriguez. “So that way, anything involving Pride Student Union is respected.”

However, issues arose in response to one of the resolution’s sponsors, former SGA senator and FIU student Joshua Mandall. Under current ruling documents, it is unclear whether non-students can sponsor legislation.

Additionally, even if SGA wished to change who can be a sponsor, it would require a two-thirds Senate vote to change the statutes within the constitution. Furthermore, the vote cannot take place until the fall semester, since the constitution cannot be altered for 80 weeks following its passing.

SGA to move forward with campus council merger in 2019