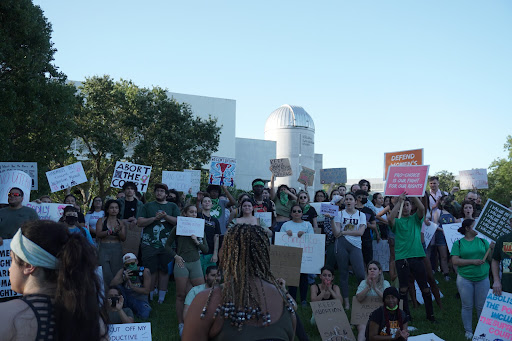 On Monday, June 27, FIU students and members of the community protested against the Supreme Court’s ruling to overturn Roe v. Wade, which effectively revoked the constitutional right to access an abortion.

The decision places the burden of abortion legislation on state governments. As many as 26 states look poised to enact bans or severe restrictions. In Florida, an attempt by Gov. Ron DeSantis to introduce a 15-week ban on abortions was temporarily blocked by a state judge on June 30.

“Abortion is not just important to them [women] personally, but to their economic and social freedom,” said Alex Franzblau, an organizer of the protest and YDSA member. “It’s a part of freedom in this country, and most Americans support it.”

“We are here to demand Democrats to act now and defend abortion rights, and don’t just tell us the wait until November.”

YDSA organizers started promoting the protest via social media on June 24, shortly after the SCOTUS’s ruling was finalized. Roughly 70 protestors were present when the first march got underway.

“This decision is not just about abortion but about healthcare in general,” said Rachel Ramirez, a senior studying sociology.

“I don’t think that these people care about life whatsoever, because making abortions illegal will not end the demand for abortions. This will only make safe abortions harder to get,” said Ramirez as protestors chanted ‘My body, my choice’ along 8th street.

As the march returned to the GC lawn, sophomore Maria-Victoria Chacon expressed why it’s essential for students to protest a ruling of this magnitude.

“What I hope to show is that students and young people are here to make a change,” she said. “We have international students here, and I want them to know that Miami and what this school stands for is not what we see going on in our state”

Catholic Panthers, a registered student organization for catholic students and staff, gathered in a public prayer celebrating the end of Roe v Wade after nearly 50 years. Its overturning is the first instance in which the United States Supreme Court has overruled a previously codified constitutional right.

Several individuals present at the prayer declined to comment when approached for comment and directed PantherNOW staff to Emily Chaffins, the organization’s pro-life chair and media representative for the event.

When asked for comment or access to interviews, Chaffin categorically declined to speak to PantherNOW but provided interviews to several other media outlets present.

The perks of group work at the University level and beyond

Three lessons from the bear in a flock of birds