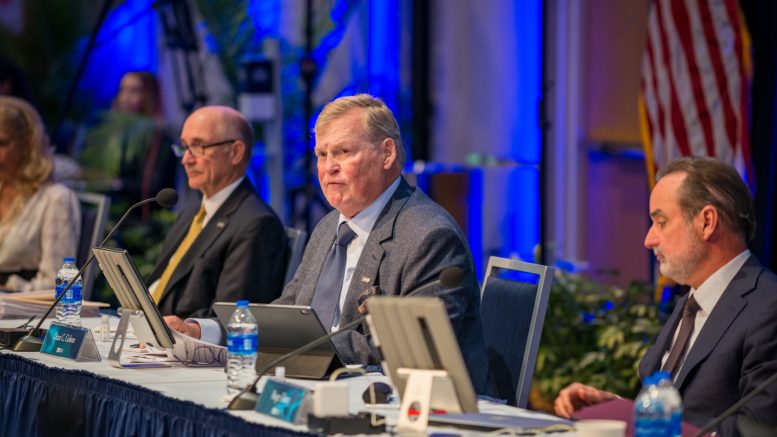 Chair Dean Colson addresses the Board of Trustees. / Via FIU Flickr

The FIU Board of Trustees has unanimously voted on major changes to the Nurse Anesthesiology Doctor of Nursing Practice Program and an update to the presidential search.

The change, which will affect 135 students, will not increase costs and will convert the program to a new compound tuition based on 110 credits, Nurse Anesthesiology (71) and Doctor of Nursing Practice (39).

Outside of the program change, the Board of Trustees also gave a public update on the most pressing matter affecting FIU, the presidential search.

They stated the presidential search committee had opened applications on June 1, originally announced via email, and that the process had closed on June 15. In their email, they also gave a play-by-play of the process.

The press releases have been the BOT’s line of communication outside guidelines from Florida Senate Bill 520 which prohibits public universities from releasing identifying information of a person applying for a presidential position until the date the final group of applicants is established.

After going through the list of applicants the committee has a list of 150 candidates who could potentially be finalists. The final three or four candidates will be invited to campus during the first two weeks of fall semester to tour and meet with important groups and leaders on campus.

University’s plans sailing ahead of students

Miami duo SigFig ready to perform at this years Summerfest

Editorial: Safer than most, but is that enough?