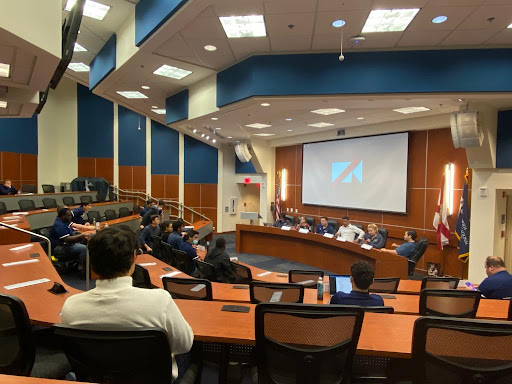 Last week, PantherNOW published an article about the Graham Center game room renovation – how it was funded and how it has far surpassed the announced timeline for completion.

This week we look at how former SGA president Alexander Rubido’s term was defined by a concentration of power in the executive branch, and how this led to the renovation’s planning and execution.

For over two years, SGA has operated as a de facto one-party system and grown increasingly defined by the power wielded by its executive branch. Arriving at this point required rewriting the constitution, discouraging political party competition and uncontested presidential ballots.

The process of planning and funding the game room renovation–a process guided by little student leadership other than former president Alexander Rubido–is a result of exactly that.

In an interview with PantherNOW in September, Rubido alluded to a flier in the still-open game room containing a QR code sponsored by the Student Space Improvement Commission, which he said led to a survey collecting student recommendations for the renovation.

The SSIC was created more than a month after the initial budget projection, marking Rubido’s first executive order in a term that would become defined by them.

“[The SSIC] didn’t have a role in the game room renovation. That was decided before the Commission was established,” Rubido said. “We used the SSIC as a way to gather and keep everything centralized.”

The order established the Commission as an entity of SGA’s executive branch – which Rubido was the head of as student body president – and cited student feedback as a “pillar of maintaining and improving student spaces.”

However, when asked about the results of the survey, Rubido said he could not recall specific recommendations or comments but claimed the responses numbered in the hundreds. When PantherNOW inquired as to whether the results were made public, Rubido said he did not remember.

According to previous reporting by PantherNOW, the game room was renovated in 2006, when new paint, walls, and carpeting were added to the space.

Rubido would serve not only as chair but would also select vice-chairs to each committee that comprised the organization, in addition to the ability to head as many committees as he deemed necessary.

Intended to be staffed by non-SGA affiliated students and produce regular reports, the Commission was also founded with Rubido as the sole proprietor of how it was staffed and operated.

Instead, owing to a lack of student participation, Rubido filled the Commission with numerous SGA members, many of whom were e-board members selected by Rubido at the onset of his term.

“It was advertised to the student body that anyone who participated wouldn’t have to be in SGA, but it was recommended that some members of SGA be a part of it because we were the ones funding any projects related to the Commission’s recommendation,” said former graduate senator Joshua Mandall.

To that end, Rubido explained that the chairs of the committees “were e-board members, and so the majority of [Commission] meetings happened during the e-board meetings. Most of the SSIC meeting details are in the e-board minutes.”

However, no detailed meeting minutes or reports could be located in any of the e-board minutes published on the SGA website either.

Instead, Mandall, who served on the BBC and SIPA improvement committees, said they were tasked with something far less than a complete renovation.

“That wasn’t necessarily how this was done,” said Mandall. “It was more of just looking at the spaces that were open concept and making suggestions on what we could do to fill them with furniture. But definitely not onto the realms of complete renovations or space improvements to that level.”

Of the 12 public universities in Florida, FIU stands out in that it’s the lone SGA constitution that permits the use of executive orders without any oversight other than the approval of the senior vice president of academic and student affairs, who for the majority of the renovation’s planning was current interim provost Elizabeth Bejar.

“A lot of the executive orders were never publicized; they were never presented to us [the senate] until much after the fact, if at all,” said Mandall.

Of the four other universities that do contain an executive order provision, all are limited either to creating specific positions within the e-board or to a review period by a judicial branch; an entity which FIU SGA has neglected to staff for over one year.

When appropriating funds from the ACB account through an executive order, the only regulation within the framework of SGA is that the student body president provides written notice to the e-board before the vote occurs.

Written into the newly drafted FIU SGA constitution shortly before Rubido ran unopposed for the presidency in spring 2021, the executive order system, which had not existed prior to the new constitution’s drafting, was used 10 times during Rubido’s tenure – totaling more than $1.7 million in student fees appropriated from the reserve fund.

That dollar amount accounts for the full-time fees of nearly 9,000 students.

“I feel that there should be a check, of course, especially when that much money is being expended,” said Mandall. “When there’s no oversight to that, of course, there’s a concern when student fees are being expended.”

SGC-MMC comptroller will not be removed

Letter to the Editor: Reporting on SGC-BBC elections ‘blemished with a number of errors’