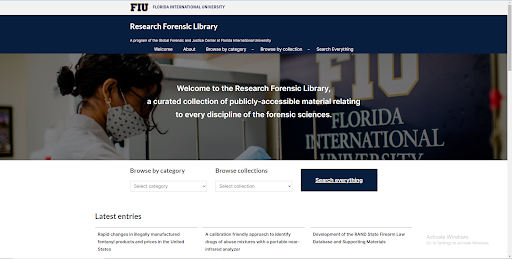 Homepage of the Research Forensic Lab.

FIU has announced the creation of the Global Forensic and Justice Center’s open-access Forensic Research Library.

A world first, the library will allow anyone to freely search through thousands of scholarly articles, reports, historical documents, or other material within the broad field of forensic science.

“Looking at the subscribers … they are medical examiner offices, county sheriff offices, private biomedical organizations, there’s a real great cross-representation of different fields and organizations that will now have access to all of this material,” said Jeff Teitelbaum, FIU forensic librarian.

FIU announced the creation of the library on June 30. It was funded through a three-year, $300,000 cooperative agreement awarded to the GFJC by the National Institute of Justice, the research, development, and evaluation agency within the Department of Justice.

However, Teitelbaum had set the foundation for the lab a decade ago, frustrated with the information available as a Washington state crime lab librarian and researcher.

“There are, I think, around 400 state-funded and federally-funded crime labs, and they just don’t have the money to purchase subscriptions these scientists need to do the research for their casework,” said Teitelbaum.

Teitelbaum would go on scouring the web for open access articles that could hold any value to the 250 scientists within the Washington state lab system.

With the continued positive feedback Teitelbaum received for the newsletter, he began searching for a means of archiving all the data.

“I got questions from people, like, ‘Can we search for the material you’ve already sent out?’ And I couldn’t do that from the Washington State Patrol,” said Teitelbaum. “That’s why I looked everywhere to try and find a way to make this library a real thing, something that could be sustained and supported.”

Teitelbaum’s search would lead him to FIU, where with the support of the NIJ, he would find the institutional support and infrastructure to finally see through the library’s creation.

It would also mark the ever-growing relationship between the GFJC and the federal government.

The center had previously been awarded a combined $7 million from NIJ and other federal agencies including the Department of Justice Bureau of Justice Assistance.

With the library now a reality, the impact has already been felt internationally, with roughly 50 foreign labs already subscribing and using the database.

“The most gratifying piece of this whole project is how valuable it seems to be to crime labs and scientists in other countries, who are often less funded than crime labs here,“ said Teitelbaum. “I would get emails saying that this kind of material kept them afloat, kept them abreast of developments, publications and research.”