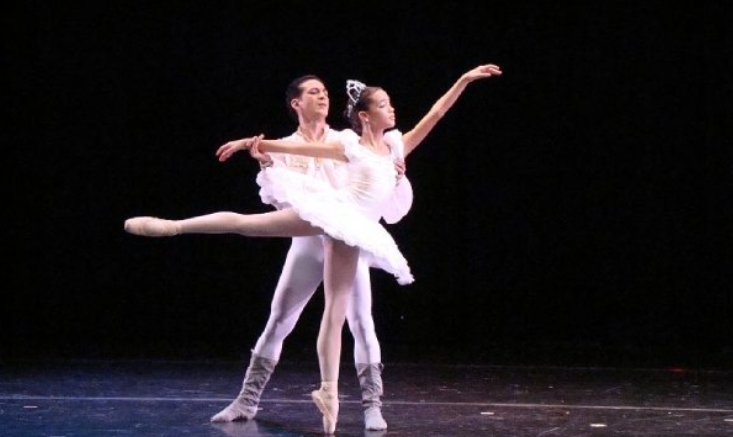 Pointe shoes and books. Studios and libraries. Studying and dancing.

What started as a five-year-old kid looking for a solution to an orthopedic “problem,” resulted in a professional ballet career for Claudia Suarez, a Venezuelan student at FIU.

On a doctor’s recommendation to straighten her legs, she started going to a small ballet studio near her childhood home in Venezuela in San Antonio de Los Altos.

It wasn’t until she was eight years old, and living in London for six months with her mother, that she realized that she wanted ballet dancing to be her career after experiencing The Royal Opera House of London.

“We were on the last balcony and I could still hear the ballerina’s pointe shoes. It was an experience that I will never forget. I still have pictures, but it got me to realize that people do this as adults as a job. You could actually become a professional ballet dancer,” said Suarez.

At 16, Suarez moved from Venezuela to South Florida and became a professional ballet dancer two years later when she signed her first contract as an apprentice with the Arts Ballet Theatre of Florida.

Suarez explained that you are considered a professional ballet dancer when you are paid for performances, signed to a company, graduated from a certain ballet school or paid a regular salary during certain amounts of weeks during the year.

However, her life is not only based on dance. Suarez has had to balance her academic life with her life as a dancer.

In Venezuela, her schedule consisted of 12 to 13 academic classes a year and five hour practices in the afternoon everyday, leaving only the nighttime to do homework.

During the pandemic, Suarez’s dance career took a new direction. After auditioning to eight dance companies and being rejected from all, Suarez realized that ballet companies are not her dream anymore.

Further, she suffered a hip injury and had to have surgery, pausing her dance career.

In 2020, she made the decision to become a professional freelance ballet dancer and continue her academic studies.

“School was always a backup, but I always wanted it to not be a backup. [I wanted] something to combine both of my passions. Which I figured was history [and ballet] , and now I have the best of both worlds,” said Suarez.

Suarez also shared how seeing various of her favorite professional dancers be able to balance performing and their education inspired her to do the same.

Suarez’s interest in the history of ballet dates back to her first-ever dance teacher in Venezuela, teaching the origins of each performance that they did.

Her teacher shared information of who the first dancers were to perform in the specific roles, as well as taught the different techniques seen in ballet depending on the country where they are performed.

“So I always had that spark of curiosity, like where did ballet come from? Why is it different in London than Venezuela or the U.S or Russia… so what about ballet?” said Suarez.

Suarez originally began her university career as a Journalism major at Broward College but realized that she not only wanted to talk about what was going on in the ballet world, but instead learn more about this centuries old art form.

“I’m going into this path of history to actually research about different aspects of dance that haven’t been discovered before, because we do have this art form out there of ballerinas, tutus and pointe shoes, but where did it all come from?,” said Suarez.

Suarez knows that as a ballet historian she wants to continue to research the artform, write books, and go to ballet schools as a professor to explain the history of ballet.

Recently, Suarez has been accepted into FIU’s BA/MA Accelerated Program in History where she can graduate with her masters at the same time as she finishes her bachelors.

“I like that I’m honoring an art probably 500 years old, which is really cool. This is why I’m studying the history of it… The performing aspect of [ballet], the result of why [people] go to the theater to look at a dancer or a ballet, and enjoy it. I love to deliver that to people,” said Suarez.

President of National Organization for Women discusses the Red Zone