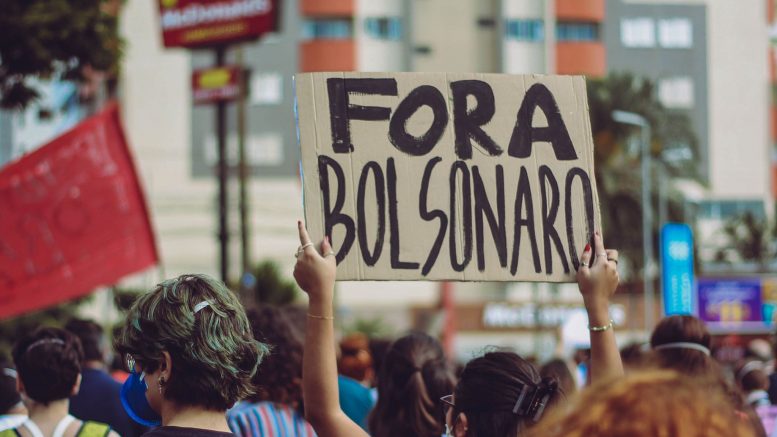 Woman holding a sign that translates to "Out Bolsonaro" during a protest. Photo via Unsplash.

Moving to the U.S. from Brazil was a drastic change but experiencing new cultures gave me a fresh perspective on my native country. But because I don’t live there anymore, my criticism of the country is always invalidated.

As a critic of the current Brazilian government, pro-government readers constantly tell me, “You don’t know what you’re talking about, you don’t live in Brazil, you don’t experience Brazilian daily life”. But do you really think that your critique is not valid because you don’t live in your homeland anymore?

If you believe it’s not valid, activists like those in the Miami Patria y Vida movement would prove you wrong. These people show that political activism is not limited to nationality or residency.

Not being able to experience your home country’s reality on a day-to-day basis shouldn’t invalidate your opinion of its people and government.

Moral and ethical scenarios should be universally open to judgment, such as speeches by the Brazilian president Jair Messias Bolsonaro.

“I’m not a gravedigger,” said Bolsonaro, when asked about the deaths caused by COVID-19. He also shamelessly said, “Nobody likes homosexuals, we endure them,” in an interview back when he was a Congressman.

Any person in the world is able to criticize such a discourse. It is not necessary to live in Brazil to have a legitimate critique of President Bolsonaro’s unpunished hate speech.

During my time in Miami, I’ve realized that this feeling of invalidation is something recurrent.

The distance between emigrants and their native country causes insecurity for them to share their opinion.

Joaquin Pedroso, an assistant teaching professor at FIU’s Politics and International Relations department, commented on how ideology and morality impact judgment and people from different parts of the world, who have different opinions about the same subject.

“Personal experience by its nature is limited, you can only live your own life, your own experiences,” said Professor Pedroso.

It is important to acknowledge the consequences that native citizens face, caused by their  leaders’ decisions; but studying and analyzing a scenario based on political sciences are just as possible and legitimate.

“Understanding a situation with seriousness requires a sort of more sustained study that needs to go beyond personal experiences,” said Professor Pedroso. “Certainly, that does not dismiss people’s first-hand accounts of what’s happening.”

It’s easy to criticize another country, especially one that is third-world when you’re currently living in a first-world nation. Comfort and security are not part of the political debate in all countries.

However, this fact must not limit people who migrated to a new country to be silent about their home country.

The number of Brazilian emigrants voting in elections is rising.

The number of registrations increased by 25% this year compared to the last election in 2018. Nevertheless, it’s still a low number, because only 14% of Brazilian emigrants worldwide are registered to vote.

These numbers represent a lack of expression from the electorate that immigrated.

Several countries around the world allow citizens who do not reside in the country to vote in their elections.​​ Approximately 60% of the U.S. citizens who live overseas are eligible to vote. Colombia has 972,764 citizens voting in 67 other countries.

So, if you’re part of the 51.7% of the Miami-Dade county population who’s foreign-born, then check your country’s embassy and exercise your right as a citizen.

No one should feel ashamed when they’re asked about their nationality or the place they live.

Wield your right established in the social contract and speak. And if freedom is not part of the contract of your native country, then speak for those who are silenced.

Women are not objects

Obama made the right decision on Chelsea Manning