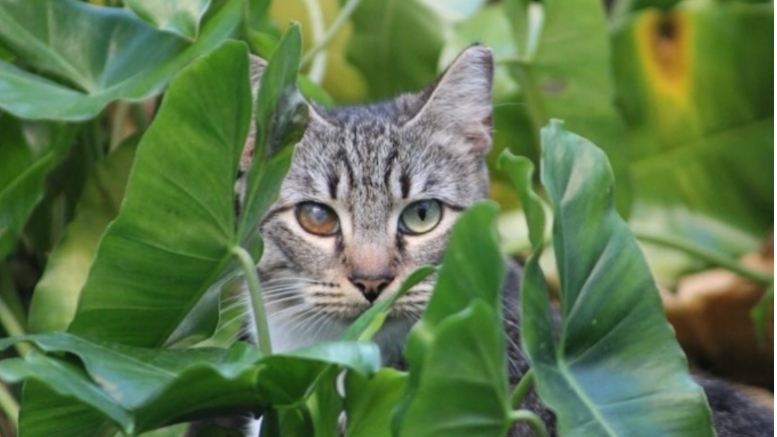 Kitty with heterochromia chilling in some plants. (Photo by Nicholas Cody, courtesy of FIU Cats/Instagram)

If you’ve ever been on Modesto Maidique Campus, there’s a possibility you’ve seen some cats roaming around. Well, these cats all have names and call FIU home and have caretakers on campus who make sure they’re healthy and well fed.

FIU Cats, an Instagram page that shows off the cats who live on campus, was created by three high school friends who began college together. It was originally meant for entertainment, but it quickly turned into something bigger.

They started the profile in February 2020 by uploading pictures of any cats they could spot at Modesto Maidique Campus.

“The initial goal of the page was just for entertainment,” said Guerrero. “But then its purpose shifted towards rescuing the cats.”

The page gained traction after someone reached out to FIU Cats for help after suspecting Tofu, a white cat who lived by Parkview Hall, was hit by a car or golf cart.

The student created a GoFundMe to help pay for Tofu’s vet bills and asked FIU Cats to repost it.

“I was like, of course I’ll repost it even though we barely had any followers,” said Guevara. “ So, I got the idea of reaching out to FIU Barstool to give us a shoutout with the GoFundMe, and ever since then we gained a lot more followers.”

FIU Cats currently has over 2,000 followers and continues to grow. The page’s content is mainly provided by the students themselves, sending in new pictures and videos every day.

Some cats are more well known than others. The “famous” ones are Kuruma, a senior black and white cat with an “L” shape on his back that lives by PG-6 and CASE.

Sparkles, a chunky orange tabby lives by Parkview. Oreo, another black and white cat who lives by AHC4 and CP. Everyone can participate in naming them during polls posted on FIU Cats’ stories on Instagram.

The three founders have many cats living in their neighborhood off campus too, which is where the idea for the page originated. At home, they fed the local cats, and then they started doing the same at school.

“I love animals,” said Guevara. “It makes me so happy to help helpless animals.”

The trio are able to pay for food and vet bills through donations by the public. On their Instagram they have a LinkTree with different links available as resources for those who are interested in helping.

Their first rescue was an FIU Cat who they took to get spayed at a facility run by the county.

Adoptions are most commonly seen when there’s an abundance of kittens during mating season, which is during February through October.

“I would say it [adoption] happens, a good amount,” said Guerrero. “We’ve gotten around 30 cats off the street in the last year and a half.”

FIU Cats have a fostering and adoption form linked on their page, where people can submit an application. They ask interested parties to take a cat home if they have adequate means to care for the cat.

They’re hoping to expand to Biscayne Bay campus and help the cats who live over there too. Soon they’ll be taking classes at BBC and can interact more often with them and try to get them adopted also. Luckily, FIU Cats aren’t the only ones feeding the kitties. Many employees also participate in providing food.

“It’s amazing helping the cats because it’s always been my dream to help animals,” said Guerrero. “I’m pre vet right now, and my main goal in the future is to have my own clinic and shelter. It just makes me so happy that I’m able to do as much as I can right now with what I have.”

All publicity not good publicity for FIU football