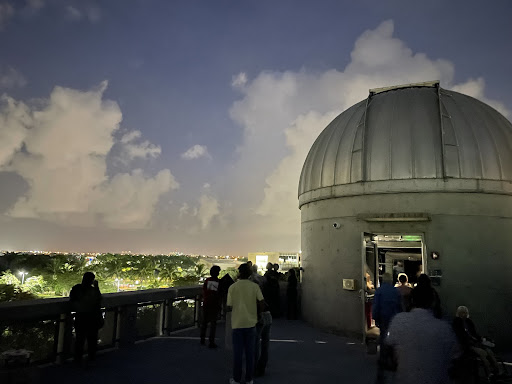 View from the rooftop, 24” telescope with dome closed. Image via Mhyanif Lozada

The Astronomy Club at the Modesto Maidique Campus started 10 years ago, and started off as something else entirely.

Dr. James Webb, the longtime advisor to the club, explains that the “Society of Physics Students (SPS)” filled the same role of offering students a means to learn more about space and celestial bodies. However, the interest for astronomy grew throughout the years, increasing when FIU’s curriculum added a minor in Astronomy in 2012. Because of this, the Astronomy Club was formally founded in addition to SPS.

Kenneth Lopez, a junior and physics major at FIU, joined the club during the height of the COVID-19 pandemic. “We usually do them [club meetings] in the evening, so we can do something downstairs, and then, if weather permits, set up the telescope so we can look at the sky, and have a good time!”

The Stocker AstroScience Center is a fully operational astronomy and teaching center, made possible by a donation from Dr. Carl Stocker, emeritus Miami-Dade College professor of physics. It consists of an entry hall, a teaching lab room, student and faculty offices, a library, a telescope control room, a rooftop observational pier with multiple telescopes, and a main 24” telescope for star imaging.

The exhibition room, located at the front entrance of the AstroScience Center, features a student-made mural on the floor, depicting a transition from the Everglades to the starry night sky; the work was made by multimedia artist, Clayton Bryant Young, who also has an installation in the ‘Imiloa Astronomy Center in Hawaii.

Fittingly, the control room is Star-Trek themed. It is also equipped with several high-quality speakers, Dr. Webb explains, for sleepless surveillance and operation nights. Webb stated that blasting Pink Floyd through all the speakers keeps him awake to gaze at the stars for longer.

Since FIU is a member of the Southern Association for Research in Astronomy (SARA), it operates two telescopes with nine other universities, along with its own: the Kitt Peak National Observatory in Arizona, and the Cerro Tololo Interamerican Observatory in Chile. The control center has cameras linked to both observatories.

The Astronomy Club has a dedicated room within the center, located on the third floor.

When asked about typical meeting subjects, Lopez further explained that the club discusses “cool space things, current events that are happening… Last year we had a presentation day, where people came up with cool things that [they] wanted to talk about regarding space, making little presentations to each other.”

Presently, the club has a Discord server and a WhatsApp group chat, and meets bi-weekly in person in the Stocker Center.

“I think it [the Astronomy Club] widens people’s ability to see and appreciate space, and this universe that we live in, and opens it up a bit to people outside of just the physics department,” said Lopez, “making it something a little more accessible to people throughout FIU to have some food, talk about some random space things, and not go super deep into all the math and physics behind it.”

“It [the Astronomy Club] lets people have a good time without going into some other astronomy-themed spaces at FIU that’s mostly just physics nerds who will just quote math. And this is coming from a physics nerd who will quote the math,” said Lopez.

Fasting made easy: Panthers share how they survive Ramadan

Entrepreneurship class to be offered fall 2014

At the Bay, Chaplin School of Hospitality and Tourism Management