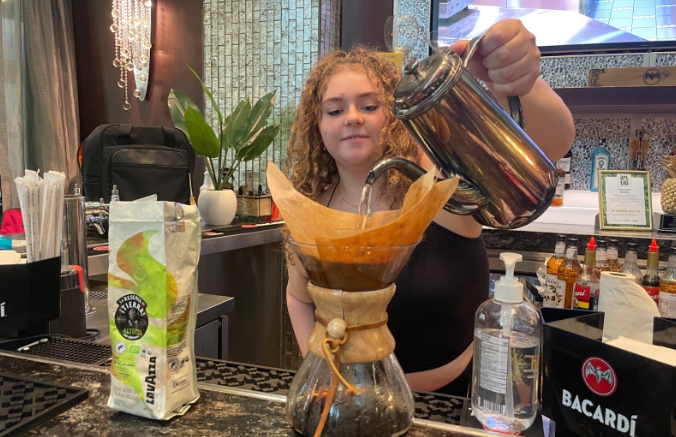 Introduced after a fall 2021 course, the Coffee Guild at FIU launched earlier this year with the help of two students with a passion for coffee.

President Rowan Jacobs, a graduate student in culinary innovation, and Vice President Gianna LaRusso, a junior in hospitality and tourism management, say that the guild has surpassed their expectations within the first year, and more is yet to come.

The guild has built a membership of over 65 students on their WhatsApp chat and members have become passionate about the guild. When the club isn’t meeting, members will get together and roast coffee or talk about brewing at FIU’s Biscayne Bay Campus Wine Spectator Restaurant Management Lab.

The Coffee Guild meets every other Monday at 5:00 p.m. to learn about coffee, brewing methods, latte art, blends, roasting and hold Kahoots. They meet at the BBC restaurant in the hospitality building.

“You can use that certification and that knowledge to get a barista job or if you want to open up a coffee shop, whatever you want to do with it, it looks super good on your resume in a world of food service and hospitality,” said LaRusso.

The idea for a coffee guild came to mind back in 2021, when The Business of Coffee, Tea, and Nonalcoholic Beverages was introduced as a class during the fall semester.

The students enrolled in the course were optimistic about the future of coffee at FIU, so they proposed that LaRusso and Jacobs lead the guild. They enlisted the help of Cristina Moguel, a program coordinator in the Chaplin School of Hospitality and Tourism Management, and the advisor to the Bartenders Guild and the Wine Guild.

Zara Rudolph, a graduate student in hospitality and tourism management and club member, said that being in more than one guild doesn’t conflict, in fact, much like the different notes found in coffee, they compliment each other.

More recently, the Coffee Guild held a collaboration with Lavazza and Grey Goose vodka to hold a cocktail and mocktail competition. The two winners, Alexa Rodriguez and Michael Eboka are presenting their respective drinks at this year’s U.S. Open in New York City.

LaRusso and Rowan share a vision that could bring more coffee connoisseurs to FIU, the prospect of starting a coffee bean farm at the Biscayne Bay Campus.

In the meantime, on Aug 22 the guilds are having a big celebration for the beginning of the fall semester. It’s a tri-guild kick-off with the Coffee Guild, Bartenders Guild, and Wine Guild.

There will be DIY coffee scrubs, tie-dying with wine, bar trivia cup pong, and more. The kickoff is from 5:00 p.m. to 6:00 p.m. at the FIU BBC Wine Spectator Restaurant Management Lab, or HM 129.

To play along with the Coffee Guild’s Kahoots and find more information on their events you can follow their Instagram page, @coffeeguild_fiu