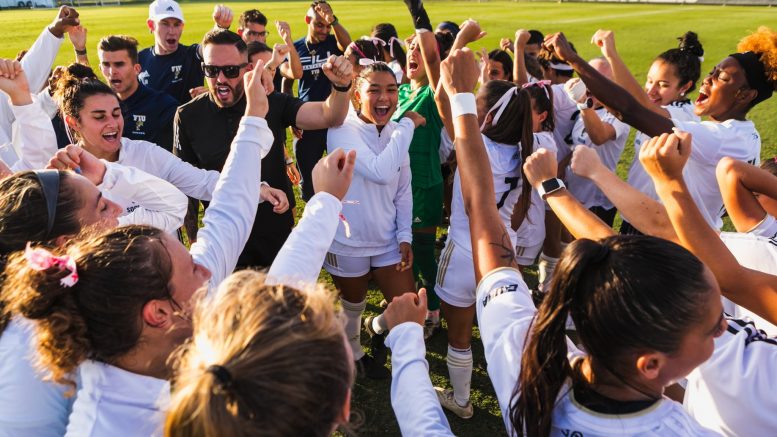 Following last season’s disappointing results, the FIU Women’s soccer team is coming into this season with new faces, seasoned veterans and a competitive drive to elevate the program.

Women’s soccer head coach Jonathan Garbar sat down with PantherNOW to discuss the upcoming season, telling fans to expect the team to be much different.

“Very dynamic, very intense, a very committed brand of football,” said Garber. “Our team is going to look and feel, in many ways very different from years prior.”

Finishing either last in the conference or in the bottom three in the last two seasons, FIU ended with a 1-5-2 record in Conference USA and a 2-12-2 overall last campaign, capping off a turbulent two years.

There were a handful of games in which the team looked like they could come from behind or score more goals to secure a victory, but costly mistakes hampered any kind of late-game efforts.

Garbar had the team training hard during the spring and summer. He got creative with his training methods, bringing in a practice squad full of male student soccer players to train with his team.

“This is something that I’ve done in the past, when we bring the male and female athletes together; as long as their goals and their characters are aligned, really great things happen,” said Garbar. “It brings another level of competitiveness.”

This was the first time in Garbar’s tenure at FIU that he and his staff have been able to recruit for a full year. This led to Garbar’s decision to spruce up the team with fresh faces, some even from overseas.

According to Garbar, this team is just “built different.” He sought out players who were committed to developing, not just a great team, but a culture enriched by their new exciting, competitive dynamic.

“I think I made the mistake of trying to push and rush things a bit too early,” Garbar said when asked about what he has learned from last season. “We really want to start from the ground up. We’re not going to rush things.”

“We’re not trying to stay in games and hope for better results… You’re going to see us going for it… I think the biggest thing you can see is we’re not gonna be playing with fear.”

The FIU Women’s soccer team will start their regular season on Aug 18 when they travel to Louisiana to face the University of Louisiana Ragin’ Cajuns and on Aug 21 at 7 p.m. the Panthers kick off their home campaign, hosting Mississippi State. You can see the full schedule here.