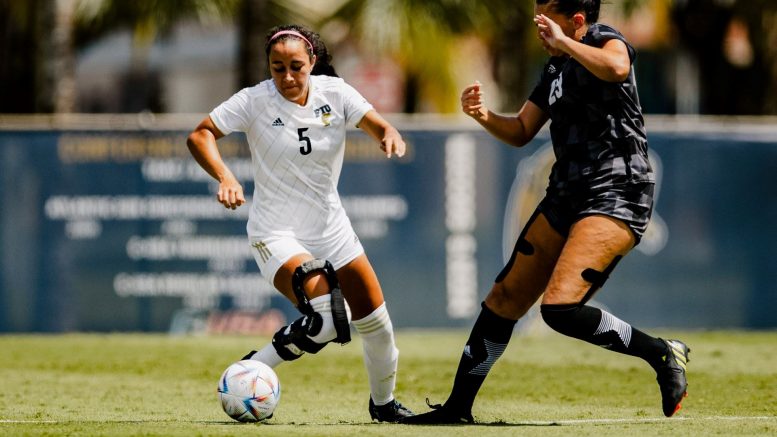 The FIU Women’s Soccer season kicked off in Lafayette, Louisiana on Aug. 18, as the Panthers fell to the University of Louisiana Ragin’ Cajuns 2-1.

The Panthers controlled the first half and scored an early goal to take the lead of the game. Forward Noemi Paquin connected on a volley after a pass from defender Idelys Vazquez. FIU took a 1-0 lead into the break.

The Ragin’ Cajuns fought back in the second half and the crowd in Lafayette cheered on every touch giving the home team a confidence boost. Louisiana broke through after a Panthers defensive error, scoring in the 64th minute, tying the game 1-1.

Minutes later, a second goal was scored by Louisiana off another defensive mistake from FIU, giving the Ragin’ Cajuns a 2-1 lead that they wouldn’t relinquish.

Next up, the Panthers hosted their first game of the season on a hot Sunday in August, facing the Mississippi State University Bulldogs. FIU lost 3-1, meaning they dropped both of their opening games of the season.

With nearly five minutes left in the game, defender Delinda Sehlin celebrated her first goal for FIU, making the score 3-1. Merely a consolation goal for the Panthers.

Despite the two losses, FIU head coach Jonathan Gabar had nothing but praise for his squad, saying he wanted the first two matches of the season to be against competitive teams to help player development.

“Honestly couldn’t be prouder of what we’re doing so far,” Garbar said. “The young ladies have been absolutely committed and dedicated to trying to play a way that FIU has not played for years.”

The Panthers are looking to avoid an 0-4 start, which would be the worst start to a season since 2018, as they take on Stetson and Southern University this week.

The Panthers face the Stetson Hatters on Aug. 25. at 5p.m.

The two teams have faced each other 11 times before, the most recent game being on Aug. 19, 2021 where the Panthers walked off the field with a victory.

This win was FIU’s first since 2014 against Stetson. The energy from the crowd at the FIU Soccer Stadium provided just enough motivation for the Panthers to keep their pace and perform well.

While the Hatters brought a good defensive setup, FIU walked out with a 2-0 result, starting the 2021 with the right foot and a strong ambition.

The Panthers and the Hatters have performed similarly in their games. In the totality of 11 games, each team has won 5 and there has been one draw.

Stetson’s Hatters have played two games this season, with a 5-0 victory against South Carolina State, and a 3-0 loss against the University of Florida Gators.

Gabar spent time in training this week urging his squad to keep the high intensity and play fearless football against Stetson.

“Everybody talks about wanting to play without fear, but if your tactics don’t match that it doesn’t mean anything,” Garbar said after practice on Tuesday. “Now we’re focusing on performance, not results right now.”

After their trip to Stetson, the Panthers will host Southern University on Sunday Aug. 28. This is the first meeting between the two teams.

The Jaguars have started the season with one win and one draw, beating Nicholls State University and drawing against North Dakota State.

FIU is prepared to be aggressive against both Stetson and Southern, in training the Panthers are training with “game intensity” and want it to translate to gameday’s.

“I think we just need to not be scared to go into tackles and just go aggressive because teams are going to come to us aggressively,” said Paquin.

Coach Garbar is preparing his youthful side for season ahead and has praised the efforts of his players in maintaining the standards he sets for them.