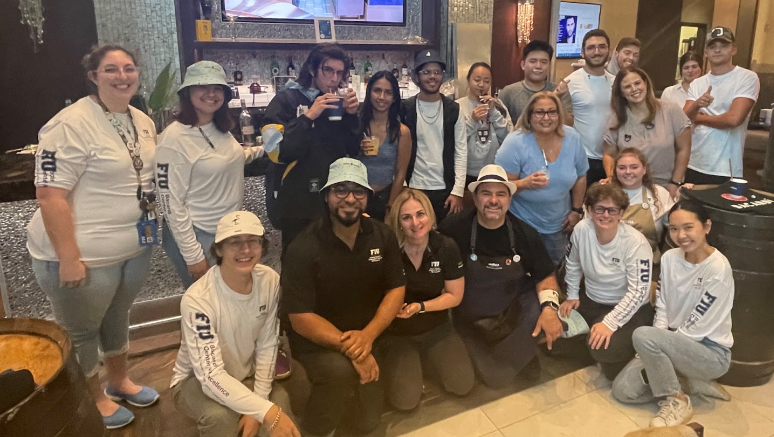 Members of the Wine Guild, Bartender’s Guild, and Coffee Guild were joined by prospective members, advisor Cristina Moguel and others for an afternoon of events. | Francine Canelo, PantherNOW

Bottoms up: from coffee to wine to other cocktails, FIU Hospitality had plenty to choose from at their Tri-Guild Kickoff.

On Aug 22, the three guilds based in the Chaplin School of Hospitality and Tourism Management hosted the Tri-Guild Kickoff Party in FIU BBC’s Wine Spectator Restaurant.

During the hour-long event each guild showcased their area of specialty, announced plans for the upcoming semester, and mingled with current and prospective members.

The Coffee Guild let visitors pour their own cold brew, using a French coffee press to make cold foam themselves and a mix of heavy cream and Javamelts’ flavored sugar to make it just right.

Attendees also got creative making their own latte art with various stencils and cinnamon powder.

Rowan Jacobs, president of the Coffee Guild, said that in the fall semester there’s going to be more latte art, members will make chocolate covered coffee beans, and FIU students can look forward to the study abroad program in Costa Rica from Jan 2 to Jan 8.

Participating students will help uncertified professionals obtain their credentials, such as the USDA, Fair Trade, and the Rainforest Alliance certifications.

During the trip, students will visit three different coffee growing regions and “learn about both coffee and sustainability and how they each affect the local economy, travel, and tourism.”

The Bartenders Guild, stationed at the restaurant’s bar, showed visitors how to mix, shake, and pour their own drinks.

“You’re gonna pour your mocktail into the jigger until it’s about to overflow, you want to make sure you get the two ounces,” Parades told attendees.

After putting ice in the shaking tins and pouring their drinks in, the guild members demonstrated how to shake it horizontally until the outside of the tin felt cold. When finished, the attendees enjoyed a frosty, flavorful drink.

Several trays of food, mostly staples of Latin cuisine, were prepared for the event, such as croquetas and guava pastries.

The Wine Guild had their table at the center, where members set up an educational wine cup pong game.

Each of the cups had wine-related trivia questions in them. Players had three tries to land a small ball in a cup. Those who succeeded needed to answer the question in the cup which they landed the ball in. These questions ranged from guessing major wine exporters, to pinpointing the origins of wine types.

“The wine guild offers students opportunities to learn about wine through some amazing guest speakers, including Eric Hemer, who is currently one of four people in the world with the title of Master Sommelier and Master of Wine,” said Moguel in an email to PantherNOW.

“In terms of plans for the fall,” Moguel said, “we are currently preparing to launch a competitive wine tasting team that will allow us to train our noses and palates on a more intensive level and allow us to have the opportunity to compete against other universities all over the world.”

At the end of the event, Paredes and Moguel urged members to use the QR codes on the flyers to vote for the upcoming editorial boards of each guild. The e-board elections for all three guilds will be held at the end of the fall semester, so the new boards assemble before the spring semester begins. With leadership positions decided, the guilds’ e-board members make plans for the upcoming semesters.

“We wanted to showcase what we do,” Paredes told the audience. “We want to show all our students that there’s an art of bartending, an art of coffee, and an art of wine.”

Music is a language that transcends all boundaries

FIU parking problems are not just in MMC but BBC