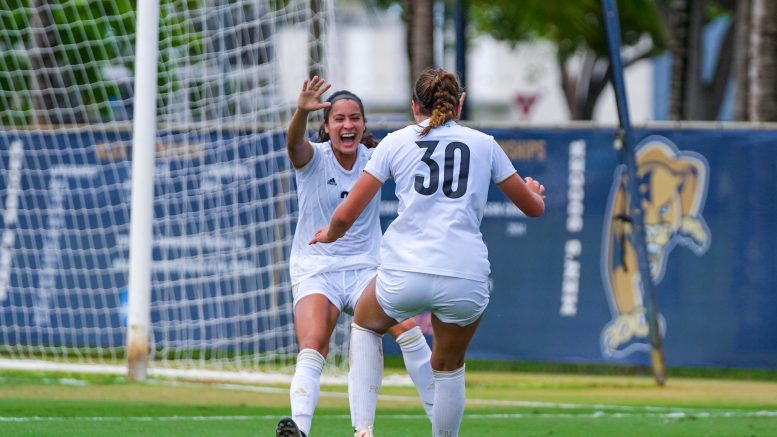 Winning their last two games, FIU’s Women’s Soccer are on a win streak for the first time since the 2015 season.

A 3-1 victory against Stetson, followed by a 4-2 against Southern University will serve as a confidence boost to the team under the coaching of Jonathan Garbar.

“I think with the two wins here we know more what to look for,” said midfielder Nikole Solis following her hattrick against Southern. “I think we’re more ready.”

Hitting the road to Deland, Florida, FIU dominated the game scheduled against Stetson University, beating the Hatters for a second consecutive season.

Midfielder Catherine Rapp put on a show, scoring two goals. The first goal came only six minutes into the game, with an assist from midfielder Kaio Chinatsu.

Before the first half came to an end, the Hatters scored a goal in minute 43. When the match resumed, Rapp added another goal for FIU in minute 56 with an assist from forward Noemi Paquin.

Only a minute after the second goal by FIU, Solis came through for the third goal to make the final result a 3-1 victory for the Panthers.

On Sunday, Aug. 28, the Panthers hosted the Southern University Jaguars, beating them with a result of 4-2, which included a few “first times” for FIU.

Solis achieved the first hattrick of her collegiate career with a splendid performance, showcasing her abilities of scoring goals and being a valuable player for the team. Moreover, midfielder Dominique Marcelli scored her first goal as a Panther.

The first goal in the game was scored by the Jaguars, only four minutes deep into the first half. Solis tied the game during minute 28.

Southern University committed a foul which resulted in a penalty kick for FIU. Marcelli was chosen to kick the ball, and scored a goal in minute 31, receiving a loud cheer from the crowd for her first goal.

“The confidence came from my teammates, I know that they trust me and I trust them and everything that we do together,” Marcelli said about the confidence she had in her penalty. “So that PK I might have taken it, but the confidence that they gave me when I took it, it’s all them.”

During the second half, Solis scored her second goal of the game in minute 69 with an assist from Marcelli, proving they are a useful duo in the lineup.

Soon after, in minute 79, Solis managed to score her third goal and registering a hat trick to her name.

In minute 82, the Jaguars managed to score another goal, making the game 4-2, and it remained with that result when the referee blew the whistle marking the end of the game.

This game became the most scored game by FIU Women’s Soccer since Sept. 29, 2013 when the Panthers faced Old Dominion. Over their two games last week, FIU scored seven goals and only conceded three.

FIU was scheduled to face the University of Miami on Sept. 1, at 7 p.m. in Coral Gables; however the game was postponed until further notice. Out of the 10 times the Miami teams have faced, the Panthers have only won once.

The Panthers will head to Nashville, TN. to face the Lipscomb University Bisons on Sept. 4, at 6 p.m.. The Bisons and the Panthers have faced once before, ending in a 1-0 loss for FIU.