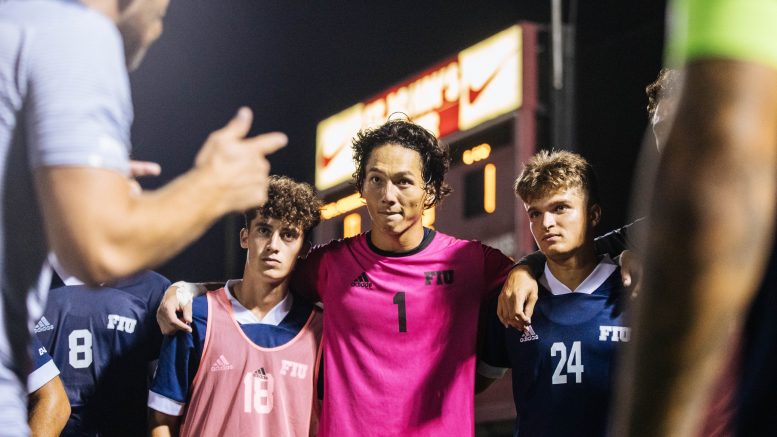 The Panthers flew to the city that never sleeps to face the 25th ranked Red Storm for the first time, claiming victory.

The first half included a handful of fouls for both teams, but the New York crowd was stunned when midfielder Julian Hodek scored a free-kick in the 19th minute, Hodek’s first goal of the season.

The free-kick goal gave the FIU players the confidence to continue attacking and secure a win. Forward Fumiya Shiraishi, and midfielder Yushi Nagao shot the ball at the net, but both actions were stopped by the St. John’s keeper.

Closing out the second half, the Red Storm had the chance to score the tying goal , but FIU’s goalkeeper Kevin Harr managed to stop the ball.

The Panthers dominated the game in New York, wrapping it up with three shots on goal, and six saves by Harr.

After tasting victory, the Panthers faced their next challenge: the 13th ranked University of North Carolina Heels.

The Dorrance Stadium in North Carolina started filling up as fans eagerly wanted to watch the game. The energy that evening was intense, with a lot of support for the Heels.

Starting the match off strong, the Panthers took control of the game, dominating the field. A slow first half saw six shots at goal from both teams before there was a goal.

In the 24th minute, the Panthers got their claws out as forward Stephen Afrifa made a superb move and scored the first goal of the game, with an assist from Nagao.

Before the first period came to an end, Afrifa threatened to score another, managing to two more shots, but the UNC keeper saved both.

Returning for the second half, Coach Kyle Russell decided to make a few substitutions. UNC started the second period with a corner kick to their advantage. In minute 54 and 56, the Panthers had two corner kicks as well.

Afrifa’s “one is not enough” mentality drove him to score another goal in minute 61, with an assist from forward Bernardo Dos Santos Monteiro, which brought the Panthers up 2-0.

“Stephen showed up in a big way tonight,” Russell said after the UNC win. “He can score at any time on anyone in the country, and he proved that again tonight.”

In minute 69, the Tar Heels scored a goal, putting pressure on FIU; however, the game lost intensity near the end, with only one more shot from each team.

For the second game in a row, the Panthers walk off with a win on their backs, and they return home to play against the University of North Florida Ospreys.

“This was a complete team win that the boys dug deep to earn against one of the country’s top soccer programs,” said Russell following the match with the Tar Heels.

The FIU Panthers and the UNF Ospreys have an irresolute history, where nothing is certain. Having faced one another on nine occasions, the Panthers have won four games, lost three, and tied two against the Ospreys.

The game is scheduled for Tuesday, Sept. 6 at 7pm in the FIU Soccer Stadium.