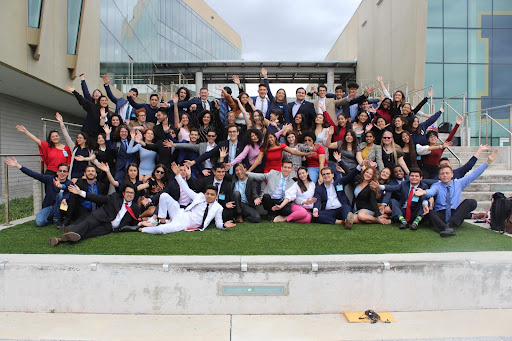 FIU's Model United Nations program after being recognized as the top-ranked program in North America in 2019. Photo courtesy of Alex Anacki.

One of the most prized accomplishments of late SIPA Dean John F. Stack was the success of FIU’s Model United Nations program, which has consistently placed in the top five of all collegiate programs in North America and reached the rank of some of the nation’s highest performing collegiate programs along the way.

Assistant professor of political science Dario Moreno founded the Model UN program in 1988, and Stack’s leadership of the program began in 2005 after the retirement of former professor Jeanne Kates.

Since then, the program has grown from 15 delegates at one point to over 75 this academic year, and the annual high school conference – FIMUN – has existed for just as long.

Aside from leading and developing the program for 16 years, Stack also served as a mentor to students in public speaking skills and political science. An integral part of the yearly Model UN circuit – when delegates travel to various conferences across North America and compete against other colleges – was Stack’s emphasis that the team could match the prowess of delegates from traditionally highly-touted colleges.

FIUMUN alumnus Alex Anacki shared how Stack’s own brand of leadership impacted the program, leading them to Best Delegate’s first overall ranking in North America in 2019.

“He cared about the Model UN Team. He came to our conferences, cheered us on in our victories, and motivated us no matter the outcome,” said Anacki. “The Dean pushed us to be better; he wanted to know what we thought, and he challenged us constantly. If he disagreed with what you had to say, he wouldn’t think twice about telling you.”

In July, current and past members of the program gathered to honor the late dean, remarking on the Dean’s passion for the program and reminiscing on the memories and victories they shared.

In 2021, FIUMUN was ranked third nationally behind only Georgetown University and the University of Chicago–both private institutions. It marked the program’s eighth consecutive year placing in the top-5 of collegiate programs in North America.

Junior Alex Sutton spoke of the Dean’s lasting legacy on the program.

“He touched thousands of students through his mentorship, from the moment he joined the university to the days before he passed,” said Sutton.

“He never stopped. He continued to work with the university to make sure he was there. A relentless advocate for FIU, his students and Model UN up until the day that he passed away. He never let up.”