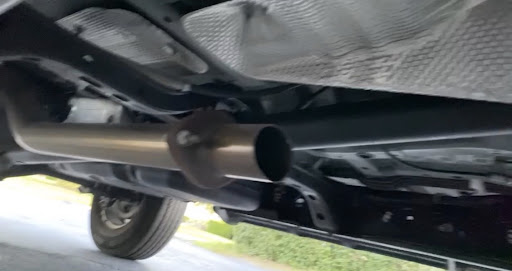 Junior Amanda Vubillones woke up one morning on the Modesto Maidique Campus to find her catalytic converter had been stolen -- a national trend that may have found its way to FIU. Photo courtesy of Amanda Vubillones.

Two confirmed cases of catalytic converter thefts during the first week of the fall semester may portend the arrival of a national crime trend to FIU campuses.

Catalytic converters break down and filter pollutants produced by a vehicle’s exhaust system before they are released into the air. When stolen from the underside of vehicles and then resold, repairs can often cost the owner thousands of dollars.

In the first week of the semester, two FIU students reported the crime to campus police and the topic quickly made its way into several housing group chats.

Amanda Vubillones, a junior studying biology and University Apartments resident, found herself warning fellow housing students about the incident after she found her catalytic converter missing one morning.

“I was leaving for work around 6:00 a.m., and when I got into my car, it made a really loud and weird noise,” said Vubillones. “I figured it was the catalytic converter because it has happened to other people.”

The price to replace a catalytic converter can range from $1,000 to $3,000, according to the NICB. While Vubillones’ insurance covered the full cost of the replacement, she said the incident made her feel unsafe on campus.

“I knew it was a nationwide issue, but I didn’t know it could happen at FIU since police patrol so much around the area,” said Vubillones.

The frequency of the crime has risen exponentially over recent years, according to Detective Timothy Herring of the Port St. Lucie Police Department, who described the trend as a “nationwide epidemic” to the Treasure Coast News.

The increase in crimes is due to, as The National Insurance Crime Bureau (NICB) reports, “skyrocketed” values of three precious metals that make up the converters–platinum, palladium and rhodium. Stolen converters resell for as much as $200 when brought to junkyards or private sales.

An Illinois-based non-profit that works to combat theft and insurance fraud, the NCIB, reported 3,400 catalytic converters stolen from vehicles in 2019, a number that quadrupled in 2020 and ultimately reached an estimated 50,000 in 2021.

In some U.S. cities such as Los Angeles, where residents are under strict emissions regulations, mechanics are installing “catalytic cages” at a rate of several hundreds of dollars to prevent cases of theft.

“FIUPD is aware of the national trend regarding thefts of catalytic converters,” said Casas. “While at FIU we’ve only had two incidents so far that have been reported, we are implementing measures to deter these types of thefts, such as directed patrols in the parking lots and garages.”

Casas referenced other protections implemented over the past few years, including increased security cameras and license plate readers installed in all parking garages and many parking lots.

“Luckily, we’ve only had two cases, but it’s one of those things you get in spades,” said Casas. “As always, FIUPD recommends that students do what they can to remain safe. And while I’m aware that parking can be a challenge at times, try to park in areas that are lit as well as possible.”