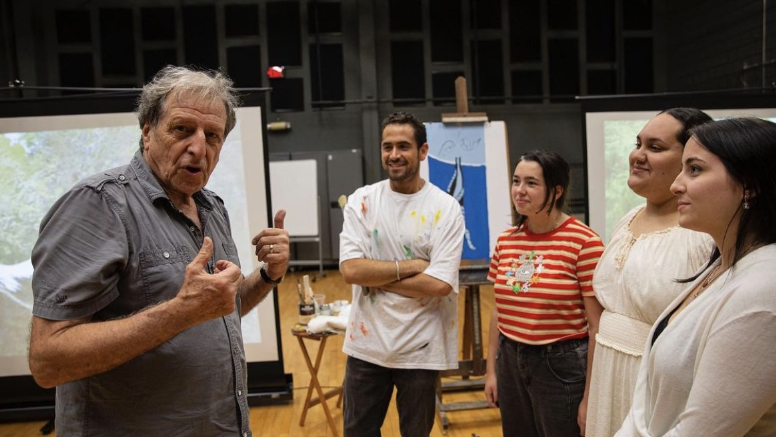 Phillip Church working with performers during a rehearsal of “Flying Solo with Artist X.” Photo courtesy of Phillip Church.

When Russia declared war on Ukraine in February 2022, FIU Professor Phillip Church knew that he had to do something to bring awareness to the situation.

By June 2022, Church had put together a project that combined Ukrainian and South Floridian artists in a production called “Tribute to Ukraine.” The production is just one of the many humanitarian-driven performances that theater group What if Works have put together.

What if Works, which became incorporated in 2011, is a not-for-profit organization focused on community-engaged productions, dramatic curations, and performances of well-known plays that allow young artists to gain professional experience while “championing the arts to bring about social change.”

By putting together projects with activist undertones such as their most recent “Tribute to Ukraine”, Church said that WiW strives to inspire change within the community by emphasizing the importance of “socially conscious theater.”

“We are an incredibly powerful agency to bring about change,” said Church. “Rather than focusing on the box office return number, can we instead ask if we can inspire the people who are watching to be affected enough to go out and make a difference themselves?”

“Tribute to Ukraine”, held in partnership with the Ukraine Trustchain, a volunteer-run organization dedicated to bringing aid to Ukraine’s war zones, donated all proceeds towards efforts to support the women and children affected by the ongoing war, as many of the Ukrainian men have had to join the Ukrainian Armed Forces.

Since 2011, WiW has put on a number of productions that speak out against current social and political issues with an emphasis on serving the needs of the local community.

“We put together project by project as the need arises within the community and say ‘Okay, what’s the vehicle that could make the most impact and really bring home what we’re going through today?’” said Church.

In 2011 WiW put together the docudrama “Body & Sold” in honor of Human Trafficking Awareness Day.

Written by Boston-based playwright Deborah Fortson,  the drama examines the struggles of five different runaway trafficking victims. The production went on to premiere at FIU, the Kennedy Center in Washington D.C., the Solent University in Southampton, England, and the Rose Theatre Kingston in London, England.

“To use theater for activism, to advocate something, I personally just can’t feel the same thing in a theater anymore with just a play,” said Church.

By partnering with non-profit, socially aware organizations such as the Ukraine Trustchain and No More Tears, WiW places social activism at its core and emphasizes the use of art to provoke thought and change.

“The bottom line to this thing is: we have an issue and we have to attend to it. This is the power of theater,” said Church.

WiW is currently promoting their latest production “Flying Solo with Artist X”, a theatrical curation centering on environmental activism based on the work and creativity of Cuban-American artist Xavier Cortada.

In between working for WiW, Church continues to teach Acting/Directing for TV and Film at FIU’s Biscayne Bay Campus. He is also working to bring a Digital Filmmaking Certificate program to FIU.

You can learn more about What if Works’ mission and its numerous projects via their website, www.whatifworks.com, or on Instagram, @whatifworks.