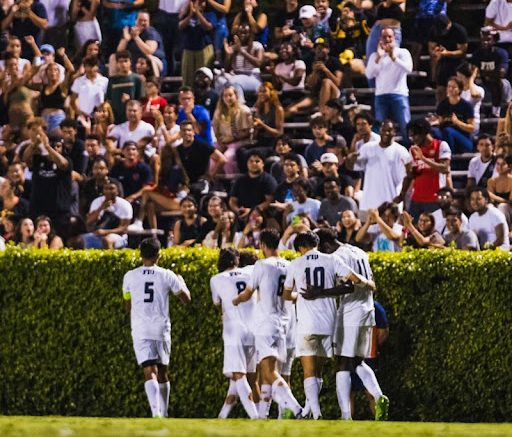 The FIU Men’s team celebrating in front of their home crowd after scoring. Photo by FIU Athletics

After losing in their home opener, redemption was on the team’s mind. The seats were full and the crowd was emphatic even before the ball started rolling; this was a must-win.

The first half of play was a defensive chess match with neither team gaining a significant edge over the other. FIU found some opportunities to score but couldn’t capitalize off any of their five shots.

As the half continued, the Ospreys began to pressure the Panther’s backline and shot with more success including a ball that went off the top of the crossbar.

The second half of play was a completely different story for the Panthers. With only four minutes played, Midfielder Yushi Nagao scored to break the deadlock.

The Ospreys goalkeeper blocked a shot but Stephen Afrifa managed to get the ball back inside the box, fend off two defenders, and lay it off to Nagao for the score all while Afrifa was on the ground.

“He’s been due for one, he’s been knocking on the door,” said coach Kyle Russell about Nagao. “He kept telling me “Coach , all I need is my first goal. I’m gonna get my first goal. So his confidence is there and I’m excited for him because he is a leader for us.”

In the 73rd minute of play, Afrifa would get his second assist of the game, setting up freshman Joao Dominguez to finish off a counter-attack play.

Afrifa would make his way into the Ospreys box and, although he had a chance to shoot it himself, made the extra pass to an open Domingues who kept his cool, took out a defender and slotted it in for the Panther’s second goal of the game.

“Super proud of him,” said an elated Russell. “He’s 18 years old. He’s a true freshman from Portugal. He hasn’t played a minute and his first minutes he scores a goal and a big home match, so proud of him.”

FIU’s relentless pressure on defense and fast-forward play was too much for the Ospreys to handle, causing them to lose their focus and composure. In the 88th minute, an Osprey player was fouled and kicked a Panther out of frustration and shown a straight red card.

Emotions ran high on both squads but FIU came out on top as the game ended with a dominant 2-0 win. This is FIU’s first win over UNF since 2018 and the first time Russell has beaten the Osprey.

“This was an important moment for us,” said coach Russell, “to be able to dig deep and be a blue-collar team and to be able to scrap if we need to scrap.”

The Panthers held the Ospreys to zero shots in the second half, helping goalie Kevin Harr get his second clean sheet of the season.

Up next for FIU is another match against a ranked opponent on the road as they will travel to Durham to face the Wildcats of New Hampshire on Saturday, Sep 10.