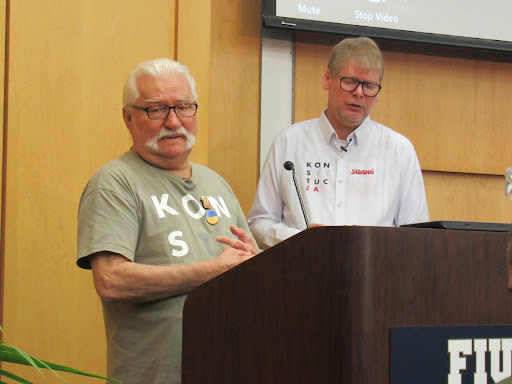 Walesa is best known for his role as the leader of Poland’s Solidarity movement, a trade union that sought social change and a move away from authoritarianism under Soviet rule. His pro-democracy work in the movement’s early days earned him the Nobel Peace Prize in 1983, and six years later Walesa was elected president as Solidarity became the first opposition party to stand in a free election in the Soviet-bloc since the 1940’s.

The Nobel Prize laureate covered a variety of topics with the FIU community, including international politics and political opposition movements in countries such as China and Cuba.

Proceedings were led by School of International and Public Affairs Interim Dean Shlomi Dinar and Inspire America President Marcell Felipe, who introduced Walesa and gifted him a guayabera shirt in solidarity with the political opposition in Cuba.

The ex-president spoke of his career as an advocate for democracy in the former Soviet state as well as his work as president.

“For more than 20 years, I was a worker. For 10 years, I built the Solidarity movement, and then for 5 years, I was the president of a 40-million strong country. And each day, I tried to fix and improve everything I didn’t like,” said Walesa.

Walesa defined the current state of modern politics as one where people fight primarily with words and ideology, and that society was caught between two epochs: tradition and progress.

He also called for the reformation of global structures and a move away from  increasing international competition.

“If we want to build something bigger and better, we should end the rat race of nations. We should find the unemployed and put them to work. [The] free market we need to keep, but everything else needs to be improved on,” said Walesa.

Comments from audience members centered on dictatorships abroad such as Venezuela, Russia and China, with Walesa emphasizing the need to advocate for diplomacy and cooperation in both the domestic and international arenas.

“In order for this to change, we need to get together with the Russians… to change their system. They will actually be thankful; they will be happy because of this change,” said Walesa, referring to Russian President Vladmir Putin’s invasion of Ukraine in February.

Walesa concluded his time with a call to action, encouraging others to organize for change and to find solutions in themselves and in their community.