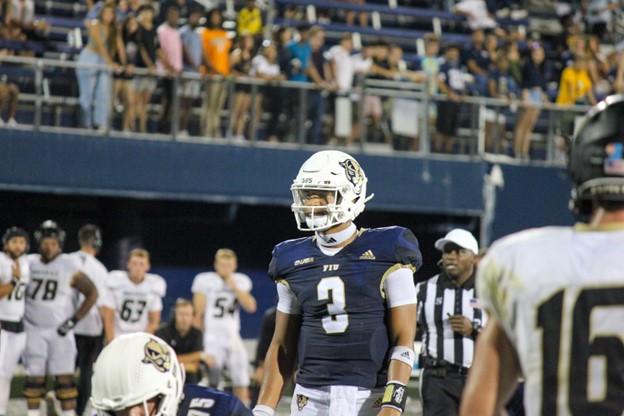 Coming off a comeback victory against Bryant University, FIU looks to take the momentum into their next game, as they go on the road to play the Texas State Bobcats in San Marcos, Texas.

Leading the charge for the 1-0 Panthers is quarterback Grayson James, who started the last game on the bench, but ended the night with fist bumps on the field as he led FIU to a 38-37 win, throwing for 307 yards with four touchdowns.

Wide receivers Tyrese Chambers and Kris Mithcell carried the Panthers’ offense on their shoulders against Bryant, as they combined for 166 yards and 4 touchdowns. Adding to this offense was wide receiver Josiah Miamen, who had four receptions for 49 yards.

The Panthers offense shined the entire game, however, there were some struggles on the defensive side, which was the reason FIU went for the two-point conversion at the end of overtime.

Throughout the game, Bryant wide receiver Anthony Frederick was the Bulldogs main target. Although Frederick only caught three passes, he ended the night with a total of 101 yards to back it up.

Other Bryant wide receivers had a night of their own, whereas FIU’s defense was struggling to match their pace. Texas State didn’t show a ton of progression during their first game, but they’ll still be a challenge for FIU if they keep leaving routes open for receivers.

On the offensive side of the ball for Texas State, the team didn’t get much done in week one, as they struggled to get things going throughout the game, only scoring 14 points and giving up two early interceptions, along with forcing two fumbles.

Mistakes such as these will be capitalized on by any team they play. A struggling offensive line and a quarterback with too much pressure make for a perfect recipe against any good defense.

On the defensive side of the football, Texas State had a rough outing against an aggressive and undefeated Nevada team, whose heavy run offense and fast plays were too much for the Bobcats, who folded under the pressure.

Texas State’s missed tackles and slow transitioning was their downfall against Nevada, as they couldn’t get a read on Nevada’s run game, and left receivers open on the passing routes. Nevada’s running backs scored four touchdowns as well, running through Texas State’s defensive line.

This will be the second time FIU gears up to play Texas State, with their first game being last season in a 23-17 overtime loss at home. This time around, FIU has a new quarterback in Grayson James, a completely new coaching staff, and a new set of running backs. However, most key players stayed, such as wide receiver Tyrese Chambers and veteran defensive back Dorian Hall.

If the Panthers win, it will be their first win against an FBS opponent in over 1,000 days.

FIU plays Texas State on Saturday, September 10th, at 7:00PM EST, which can be streamed on ESPN+ and heard on WQBA 1140 AM in South Florida