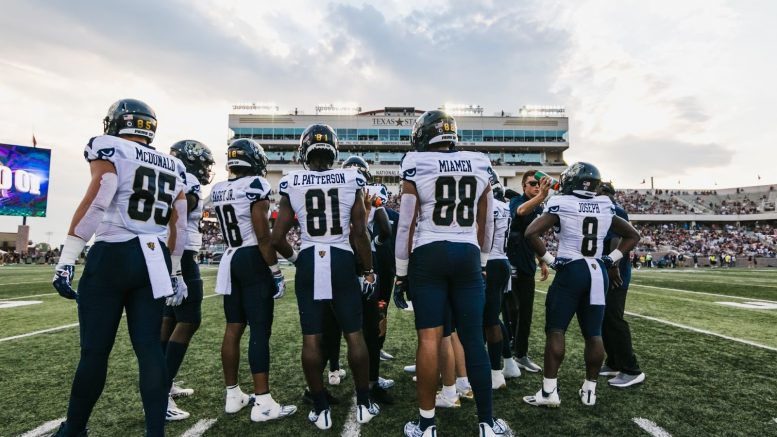 The FIU Panthers find themselves sitting at 1-1 after a 41-12 loss to the Texas State Bobcats, their first road loss of the season, and their 15th straight road loss since their last win in 2018.

After one quarter, FIU trailed 10-3 against the Bobcats. Costly penalties and a struggling offensive line were the reason for the Panthers’ early struggles.

FIU’s offense showed a bit more life in the second quarter, but even when driving down the field and getting good looks, it wasn’t enough to get a touchdown. On the defensive side of the ball for FIU, it only got worse, as they again gave up a big play that resulted in a 17-3 lead, with Texas State’s Javen Banks catching a 52 yard touchdown pass.

Near the end of the second quarter, Texas State’s Mason Shipley nailed a 54 yard field goal to make it 20-3, but a quick interception by CJ Christian helped FIU come back and make it a 20-6 ball game.

At the half, Texas State had 234 total yards, whereas FIU had 127, only averaging 3.5 yards per play. The Panthers defense struggled, giving up multiple 3rd and longs and not being in position to get stops in the passing lane.

“We just need to keep battling and play with heart,” FIU Head Coach Mike MacIntyre said at the half

The Panthers started the third quarter with the ball, but did not do much, ending their drive in a quick three and out. There was a back and forth between the two teams until the fourth quarter.

FIU’s offensive line continued to struggle, and so did their defense, giving up another wide open touchdown to Texas State’s Ashtyn Hawkins, increasing their lead to 27-6.

Late in the fourth, being down by three possessions, the Panthers were able to muster a touchdown with the help of running back Ej Wilson Jr, after that however, it was all Texas State. Bobcat Calvin Hill answered right back with a touchdown of his own, following a pick-six from Texas State’s Kordell Rodgers.

FIU couldn’t get things going offensively throughout the game, as they struggled to get big plays, and were only able to dish out short passes. Texas State’s defense made it impossible for the Panthers to run the ball as well, as their longest run was recorded by quarterback Grayson James, 16 yards.

FIU’s defense allowed Texas State running back Calvin Hill to rush for 195 yards, averaging 7 yards per carry. The defense gave up two 50+ yard touchdowns to the Bobcats in a lackluster display.

“I’m proud of how hard they fought and how well they stayed battling even when the game got away from them,” MacIntyre said postgame. “It’s a process.”

From the start of the game, costly penalties and flags set up Texas State with great field position, which helped them capitalize on an early lead.

“Every loss is tough,” James said. “But we have to learn from it and continue to get better.”

FIU heads into a bye week, where they’ll try to fix their mistakes and practice more, but most importantly, keep their heads up. After a difficult road loss like this, it is easy for fans and opposing teams to dismiss FIU, but Coach MacIntyre believes there is still time to turn it around.

“It’s still early in the season,” MacIntyre said. “We can make progress from here.”

The Panthers continue their road trip, facing conference rival Western Kentucky on Saturday, September 24th at 3:00PM. You can watch the game on CBS Sports.