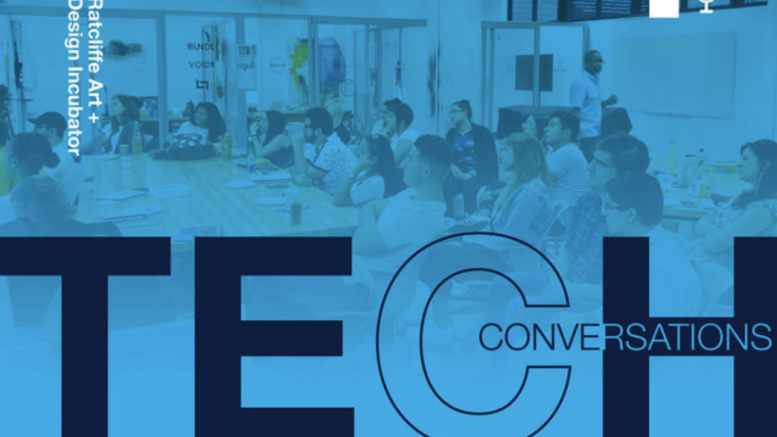 As the Miami tech revolution expands, FIU’s Tech Conversations podcast soars onto the air to capture progress and intersectionality.

The Tech Conversations Podcast at FIU’s College of Communication, Architecture + The Arts Ratcliffe Art + Design Incubator started in 2021 and is launching its fourth season today Sept. 13. The incubator is a program housed at FIU’s Biscayne Bay Campus aimed at promoting entrepreneurship and fostering new ideas for FIU artists.

“Since its launch …[the] podcast has created a platform to learn, create, and inspire meaningful dialogue across all intersections of how technology impacts our daily lives,” said CARTA dean Brian Schriner in a statement to Margarita Salas-Amaro.

The podcast discusses technology and how it intersects with design and entrepreneurship. The three co-hosts, also FIU professors, are Jacek Kolasinski, Margarita Salas-Amaro, and Neil Ramsay. Cohosts Kolasinski and Ramsay are art professors while Salas-Amaro teaches journalism. Despite their different concentrations and backgrounds, they work together on the podcast to highlight different individuals and discuss current topics.

“It’s a platform that uses technology as a common space of interaction between humans” said Kolasinski. “We are undergoing this massive shift where tech is being involved in every part of our lives.”

Despite what its name might allude to, the podcast’s definition of technology is broader, including many fields. The Incubator houses the podcast because of its alignments with these values and its focus on entrepreneurship, collaboration and innovation.

Co-host Ramsay stated that the podcast creates a space for people in all spheres of technology, from computers to social and commercial technology.

The podcast first launched alongside the mars rover, Perseverance, landing, interviewing Dr. Andrew E. Johnson of NASA in early Feb. as it neared its landing date.

“I thought it was so timely that the rover was landing and the tech and the design of the rover were right at the intersection of narrative that we wanted to kick off the podcast with,” said Salas-Amaro.

Since its launch the podcast has interviewed a variety of professionals such as Daniella Levine-Cava, Miami-Dade County’s first female mayor, and Miami mayor and FIU alum Francis Suarez, the city’s first Miami-born mayor.

Artists such as Emilio Estefan have also been guests on the podcast with Estefan helping kick off Hispanic Heritage month podcast episodes and discussing technology as a role in the Cuban protests in July 2021. FIU professors and deans have also been interviewed including FIU Interim President Kenneth A. Jessell about FIU’s role in the ever changing technological landscape.

The podcast also features many episodes discussing the intersection of identity, race, and gender with technology. The podcast hosted a conversation with transmedia artist and 2021 Knights alum Stephanie Dinkins discussing artificial intelligence and its relationship with identity-based biases.

“Our podcast really celebrates diversity and inclusion throughout the season, we’re not just limited to Hispanic heritage… we are very intentional of giving everybody an opportunity across every discipline,” said Salas-Amaro.

Identifying the issues and problems connected to technology is what guides the podcast to selecting which topics to highlight, looking to connect students and Miamians to the world around them. The upcoming season’s roster will feature a guest from the White House, creatives in tech, and artists including an FIU alumni.

“We keep our ear close to the ground to listen to what is really happening,” said Kolasinski.

Volleyball looking for a bounce back year under new leadership