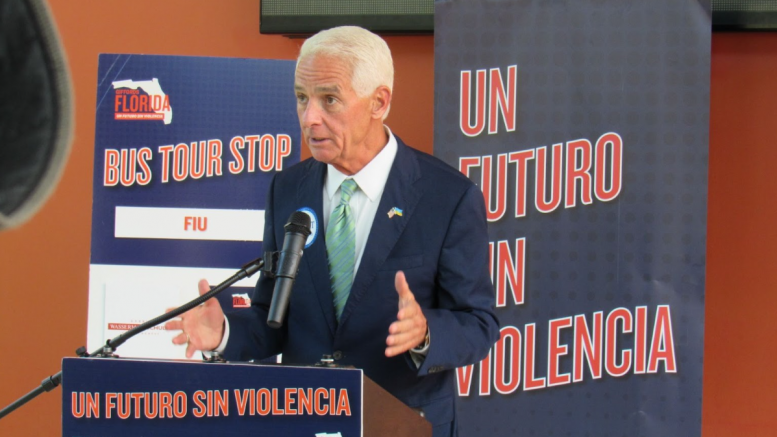 Democratic gubernatorial candidate Charlie Crist spoke at FIU on Sep 12 as part of a bus tour with the Gifford Law Center promoting his platform of gun control.

The bus tour travels around the state to educate people on the dangers of gun violence and the importance of gun control legislation and supporting the gun control movement. Speakers at the Monday event gave personal stories of suffering from gun violence.

“I’m also a survivor of gun violence,” said Representative Debbie Mucarsel-Powell. “I lost my father to gun violence when I was 24 years old and it’s one of the reasons I’ve been fighting for so many years.”

Hernandez-Mats, who is also an educator and president of the United Teachers of Dade, spoke of the unspoken responsibility teachers hold.

“What group of people are protecting our kids and putting their lives on the line day in and day out? Teachers. Teachers are the last line of defense against a school shooter,” said Hernandez-Mats. “And while it’s not part of their job description, they are braver and more willing to lay down their life than every armchair expert telling us how to do our jobs right. Teachers are superheroes for what they do. They do everything to improve our children’s lives. So, we must return the favor.”

Crist used these examples to establish his platform and his next steps if he were voted into office including banning assault weapons, thorough background checks, implementing red flag laws, and more.

Crist also used his speech to mention Republican legislators Governor Ron DeSantis and Senator Marco Rubio, both up for re-election in November.

“Governor Ron DeSantis, what does he want to do? He wants to have open carry in Florida. Reckless Ron is out of touch,” said Crist. “Florida deserves better. Florida has been stung by this issue, probably more than any state in our country, certainly as much with the Pulse nightclub nightmare with what happened in Parkland, not far from where we are… it goes on and on and on, and it must stop.”

The bus tour will continue through the state, stopping next in Ft. Lauderdale, until its eventual end in Orlando.