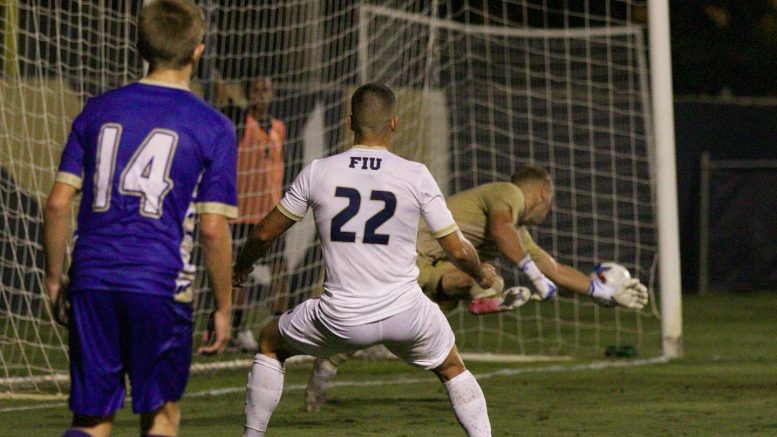 Julien Gastaldy sailing the ball past the goalie for FIU’s second goal vs Tulsa. "Photo by FIU Athletics"

FIU dominated in their debut in the American Athletic Conference with a statement win over tenth ranked and defending conference champions, Tulsa Golden Hurricane.

Starting conference play 1-0, the Panthers bounced back in impressive fashion after their loss at the hands of the University of New Hampshire.

The Panthers wasted no time putting pressure on Tulsa’s backline. Six minutes after the opening whistle, Stephen Afrifa found himself one-on-one with the Tulsa keeper after a deflection from defender. Cool under the pressure, Afrifa lofted a cheeky chip over the goalie giving the Panthers a 1-0 lead.

The game began to heat up as both teams were getting shots off. It looked as though FIU were going to walk into halftime up one until Julien Gastaldy fought his way through four defenders and slotted it into the backpost with 1:30 to go in the game. The goal put FIU up by two before the end of the first half.

The halftime break didn’t slow down the Panthers as they came out swinging at the start of the half. In the 58th minute, Afrifa found an opportunity from within the box, took out his defender, and put it past the Tulsa goalie for his second goal of the game; his fifth goal of the season.

The Tulsa offense was no match for the FIU defense as they stood their ground and defended their goal, allowing goalie Kevin Harr to pick up his third clean sheet of the season.

The relentless pressure on offense and defensive awareness awarded the Panthers the win after 90 minutes with the final score of 3-0 over the defending conference champions.

“Being able to get a good response is what we were looking for,” said Coach Kyle Russell. “We didn’t get the result we wanted to last week, and this week we had an opponent that was technically ranked higher and more prolific, and it was a hard challenge for us”

Coach Russell let his team know that they were being underestimated and it was clear to see in this game that a fire was lit within the FIU team to make a statement in the new conference.

“We showed our guys the preseason rankings and said, this is where they think you guys are, this is how they respect you. We won the season last year in Conference USA and they voted for you to be poor in this conference. Make a statement, and we did,” said Russell. “ Zero is a statement.”

FIU’s next test will be against yet another ranked team. This time, the Panthers will travel to Dallas to face the number 16 ranked SMU Mustangs on Friday, Sep 23.