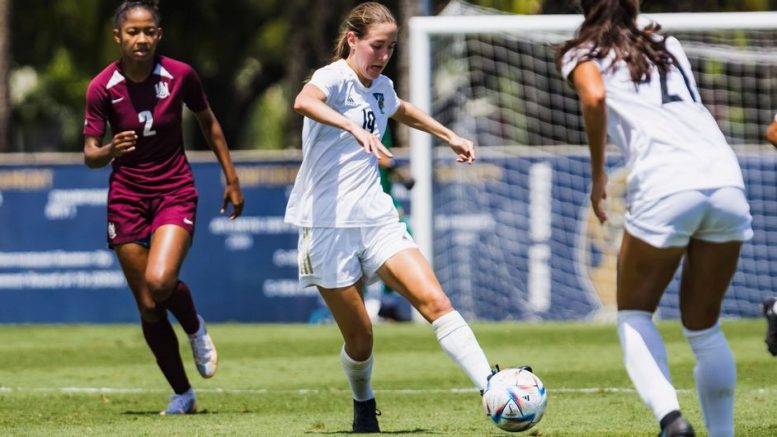 FIU Women’s Soccer opens up Conference USA play with a draw and a loss during their road trip to Texas.

After a peculiar set of games that were either postponed or ruled as “No Contest”, the Panthers faced the UTEP Miners on Sept. 15 in El Paso,Texas. Neither team got on the score sheet; however, the game had plenty of attacking chances.

With nine shots at goal, mostly by forwards Kim Schneider and Noemi Paquin, and midfielders Kaio Chinatsu and Nikole Solis, the Panthers fought and challenged the Miners in a difficult game.

Goalkeeper Ithaisa Vinoly made three important saves. Despite chances to score, the game ended in a 0-0 tie.

On Sunday, FIU visited Rice University to face the Owls. The match was a hard-fought battle that ended in a defeat for the Blue and Gold.

The dominance of the ball belonged to the opponents. Despite having minimal differences in shots on goal, 10 from FIU and 11 from the Owls, the advantage was clear to see, as the Texan team took the lead of the game from the start. Only 10 minutes deep into the first half of the game, the Owls scored a goal.

With tension building up, the second half came around with a few substitutions from each team. Solis attempted to pull one back for the Panthers early on in the half, but the ball went wide to the left.

Minute 56 saw the second goal scored by the Owls at the Holloway Field Stadium, the Panthers were down 2-0.

Chinatsu kicked the ball with a shot at goal, but it hit the post instead of entering the net. After several failed opportunities from FIU, the Owls took advantage of their dominance and scored another goal in minute 70.

Paquin, midfielder Catherine Rapp and forward Sydney Amparo each took shots at goal as the game entered the last 20 minutes.

With the clock counting down the minutes, the game ended, adding another loss to the Panthers’ schedule.

FIU Women’s Soccer haven’t won in six games, the most recent defeat from Rice moved the Panthers record to 2-4-1 overall and 0-1-1 in Conference USA.There are eight more games scheduled until the end of the season.

The Panthers are set to face the University of Alabama at Birmingham on Sept. 22 at 7 p.m. in the FIU Soccer Stadium. The two teams have faced three times before, with one win, one loss and a tie.

The last time the Panthers faced the Blazers, it ended badly for the Floridian team. A 5-1 loss left FIU with reasonable motivation for a victory Thursday night.