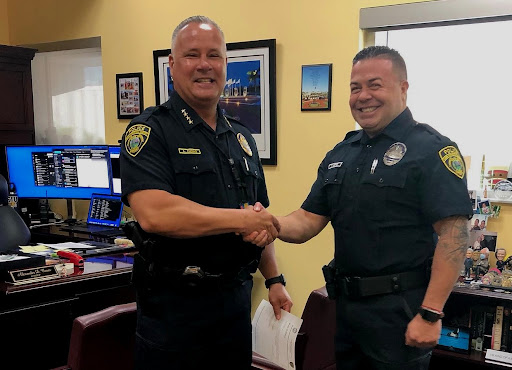 In July, FIU Police hired Yesid Ortiz, a former city of Miami police officer who resigned after an incident of excessive force and later involvement in a pirate towing scheme.

Ortiz’s 2015 incident of excessive force occurred while arresting a veteran without cause, a subsequent investigation found, costing the city government $79,000 in a following settlement according to reporting by the Miami New Times.

In July of that year, Ortiz and another officer accosted a Gulf War veteran outside his home, demanding to know if he had recorded them questioning a fruit vendor.

He had not, though it would have been legal for him to do so.

However, when he began recording his interaction with the two officers, they snatched his phone, forcibly spun him around and handcuffed him and threw him in the back of a car and took him to jail for “resisting an officer without violence”.

As a MPD officer, Ortiz was also involved in an illegal towing scheme where he and other officers would inform a “pirate” tow truck driver when there were accidents, providing him an advantage over others drivers in soliciting customers and in the process bypassing Miami’s rotation of towing companies.

Ortiz was implicated in the scheme, although an internal probe found no evidence of any financial gain on his behalf and the implication was not a criminal one.

However, his involvement in the towing scheme culminated with his resignation in 2017, though he later filed a grievance saying he was pressured to quit. The Miami New Times found that the grievance was settled early in 2021, with the city depositing a little over $6,000 into a retirement fund for Ortiz and reclassifying the resignation as retirement with no finding of misconduct.

He is also the ex-husband of FIUPD Chief Alex Casas’ wife, Grisleem, raising questions over possible nepotism in the hire. Per the university’s nepotism policy, employees may not work in a role supervising family members related either through blood or marriage.

In weeks since there has been relative silence from FIUPD, who only supplied a brief media statement.

“It is our practice not to comment on any individual candidate,” the statement read. “All applicants undergo a rigorous background process in order to be hired with no exception.”

The statement defined the standards of that process as life experience, training, education, criminal and credit history, previous employment information, references and medical and psychological examinations.

“We then weigh all of the facts and the totality of information and circumstances before hiring. The evaluation of each employee continues through an extensive probationary period, a wealth of training, and close supervisory observations,” the statement read.

Casas said that beyond a single quote he was unwilling to speak on the record addressing questions raised by PantherNOW. However, the discretion cited by Casas is a matter of practice rather than any particular FIU policy.

“The questions are fair,” said Casas.

Casas said he did not have further comments on the controversial hire.

“I am an FIU alum, I’m an adjunct professor, and I’ve been the chief of police now for 12 years,” said Casas. “I hope that our community understands and believes when I tell them that there’s nothing I would ever do to put our community here in jeopardy.”