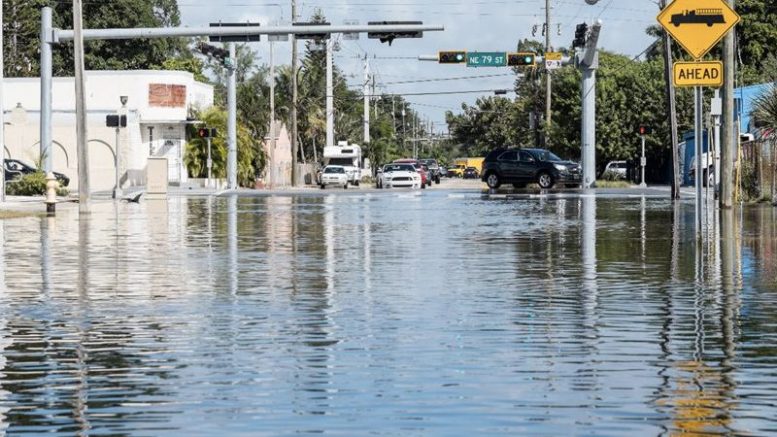 As we approach King Tide and hurricane season, Miami will be subject to terrible flooding in our streets and unpredictable weather. It’s undeniable that climate change has played a part in this.

Also known as sunny-day flooding, King Tides, according to the official City of Miami website, are  “higher-than-normal tides that typically last about three hours.” They occur annually and predictably from September to November.

On top of that, the recurrent hurricane season contributes to severe street flooding.

This year, King Tides are expected on Sep 27-28 along with Hurricane Ian (which is nearly a Category 5), affecting South Florida at the same time, effectively worsening our current situation.

I lived in Puerto Rico during the infamous Hurricane Maria and experienced the damage done to my defenseless island firsthand.

Even though it happened five years ago, Hurricane Maria’s effect on Puerto Rico is still being felt to this day, as depicted in Bad Bunny’s music video “El Apagón” — which includes a short documentary by independent journalist Bianca Graulau called “Aqui Vive Gente.”

It’s because of my experience that I worry that Miami will suffer similar consequences.

Even though Puerto Rico’s grid was old and faulty and Miami’s is much more stable, it’s a feeling that I can’t help. Especially because of how Florida is becoming more and more susceptible to flooding over time.

Due to the city’s low-lying infrastructure, Miami is one of the most vulnerable areas to the rising tide. Places with low elevations like Miami Beach and other places along Biscayne Bay are the ones that must prepare for these floods.

Even though we might wake up to bright sunshine, we somehow end up driving to campus underneath pouring rain, trying our best to avoid flooded streets. These conditions on our streets are unsafe and prone to accidents and car damage.

When unprepared for damages like floods and storms as powerful as Hurricane Harvey which flooded all of Texas and Hurricane Maria, which redefined Puerto Rico’s economy back in 2017, houses and lives are at risk.

Some places in South Florida have begun preparing to combat sea levels rising. In Fort Lauderdale, for example, people have installed tidal walls near shores as well as heightened sea walls in order to prevent incoming floods.

But as Floridians, we must always stay on guard when it comes to natural disasters.

According to NASA, the warm air at sea doesn’t necessarily increase the number of hurricanes but increases their intensity. Further, as the Arctic ice sheets continue to melt, our sea level will rise and affect us all— from inundating coastal cities to killing wildlife and damaging crops.

With King Tides to look out for, this should enlighten you to be prepared for the worst emergencies.

Climate change is irreversible, but we can minimize its impact. Every little thing we do counts, like reducing plastic waste and shopping less. It’s true that the richest people make a huge contribution to this problem with, for example, excessive traveling in their private jets — but we also must do our part in advocating for climate change.

We need to prepare ourselves as best as we can against rising tides and strong hurricanes, understand the climate crisis and advocate for a better future.

Students should fight to make climate change a top priority

Female weightlifters are an empowering community at FIU

Firing James Comey a display of ‘Trump’s failure for tolerance’