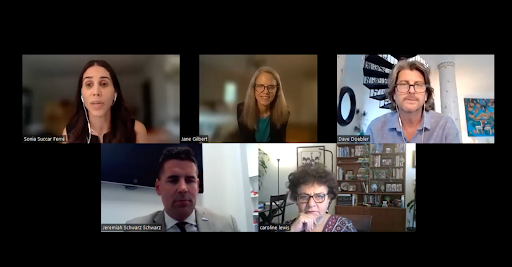 Moderated by Sonia Succar Ferré, a climate resiliency consultant and Maurice Ferré’s granddaughter, the panel was filled with employees of local governments and non-profit organizations that work to improve the region’s infrastructure against ever changing weather and rising sea-levels.

Ferré set the tone of the event by posing a question to the audience.

“Can we here in Miami-Dade withstand the Hurricane forces, the flooding, the extreme heat and the massive climate migration from other hemispheres?”

The discussion centered on Miami’s rapid growth as a metropolitan area as well as ways that the county has prepared for hurricanes or other large storms in the past.

“If you go to Brickell, you’ll notice that a lot of the new developments not only have impact windows, but the generators have been raised five stories up. So when a water based super storm comes our way, we are able to maintain power,” he said.

The panel also discussed the importance of citizen involvement in local politics and pushing elected officials to make the region’s infrastructure more resilient.

Caroline Lewis, founder of The CLEO Institute, reminisced on the humble beginnings of the resilience movement in south Florida and how far it has developed, emphasizing that it could serve as an example to influence government officials statewide.

“Tipping points are being reached faster than anticipated,” she said.

“When we speak about resilience, we are building the ship and sailing it at the same time. We have to be resilient for what we are not even ready for.”

Lewis pushed the audience of primarily students to educate themselves on climate resilience issues and to understand the complex problems at hand in order to continue pushing the movement forward.

“Keep pushing the cities and the counties to keep talking about the damages and vulnerabilities.  The young people need to stay informed; they need to know what to ask of their elected officials.”