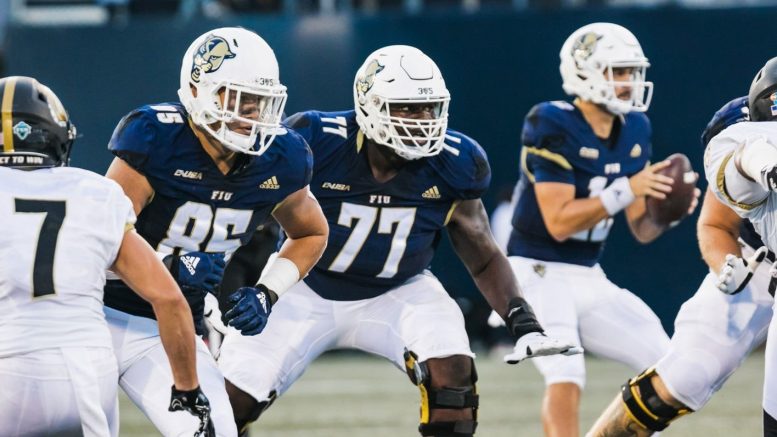 FIU hits the road out west to take on the New Mexico State Aggies before returning home for a two-game homestand. Photo by FIU Athletics

FIU football’s three-game road trip finishes out this Saturday as the Panthers travel 1,645 miles to Las Cruces to take on the New Mexico State Aggies at 8 PM.

FIU (1-2) is coming off the worst loss in program history, losing to the Western Kentucky Hilltoppers in a 73-0 route to begin conference play. The Blue & Gold gave up 688 total yards of offense, while putting up 185 yards on their own end

However, FIU head coach Mike Macintyre knows the process ahead with one of the youngest teams in FBS.

“We’re all passionate, but the other word is you have to have perseverance,” MacIntyre said after the WKU game.

FIU is looking to get back to winning ways with a New Mexico State team in a similar position as the Panthers, currently in the first year of their rebuild.

The Aggies (1-4) earned their first win of the 2022 campaign last Saturday with a 45-26 victory over the Hawaii Rainbow Warriors. New Mexico State quarterback Gavin Franks was 8-for-14 with 81 yards and a touchdown, however the running game for the Aggies found success as running back Star Thomas had 11 carries for 144 yards and a touchdown in the win.

This season, New Mexico has currently used two quarterbacks with Diego Pava, in addition to Franks who has thrown for 237 yards and four interceptions. Notable receivers include senior receiver Justice Power who leads the team with 161 receiving yards and Jordin Parker with 95 receiving yards on five receptions.

On the defensive side of the ball, the Aggies have struggled, giving up 34.6 points to their opponents and averaging 198 rushing yards to opposing teams this season. Linebacker Chris Ojo leads the team with 38 tackles including two sacks and four tackles for loss.

New Mexico State is under first-year head coach Jerry Kill who comes in trying to rebuild an Aggie program that have won just nine games since 2018. Kill, was notably the head coach of the Minnesota Golden Gophers leading them to 29 wins from 2010-2015.

For FIU to get their first road victory in over 1,000 days it starts with the offense. The running game is expected to have a major impact on Saturday against a depleted New Mexico State pass rush, that will give opportunities to running backs Lexington Joseph and EJ Wilson.

Through the air, the Panthers passing game, which only had 124 yards last week, will look to bounce back against the Aggies, who give up 203 passing yards per game. Once again, wideout Tyrese Chambers, who had just one reception in Bowling Green will be a big-time target on the road.

Defensively, the pass rush up front for the Panthers will have an opportunity against an Aggies team that has yet to have a consistent passing game this season. I’d look to defensive lineman Davon Strickland and linebacker Donovan Manuel to test them on Saturday night.

Kickoff from Aggie Memorial Stadium is set for 8 PM and can be streamed on FloSports. It can also be heard on WQBA 1140 AM in Miami.